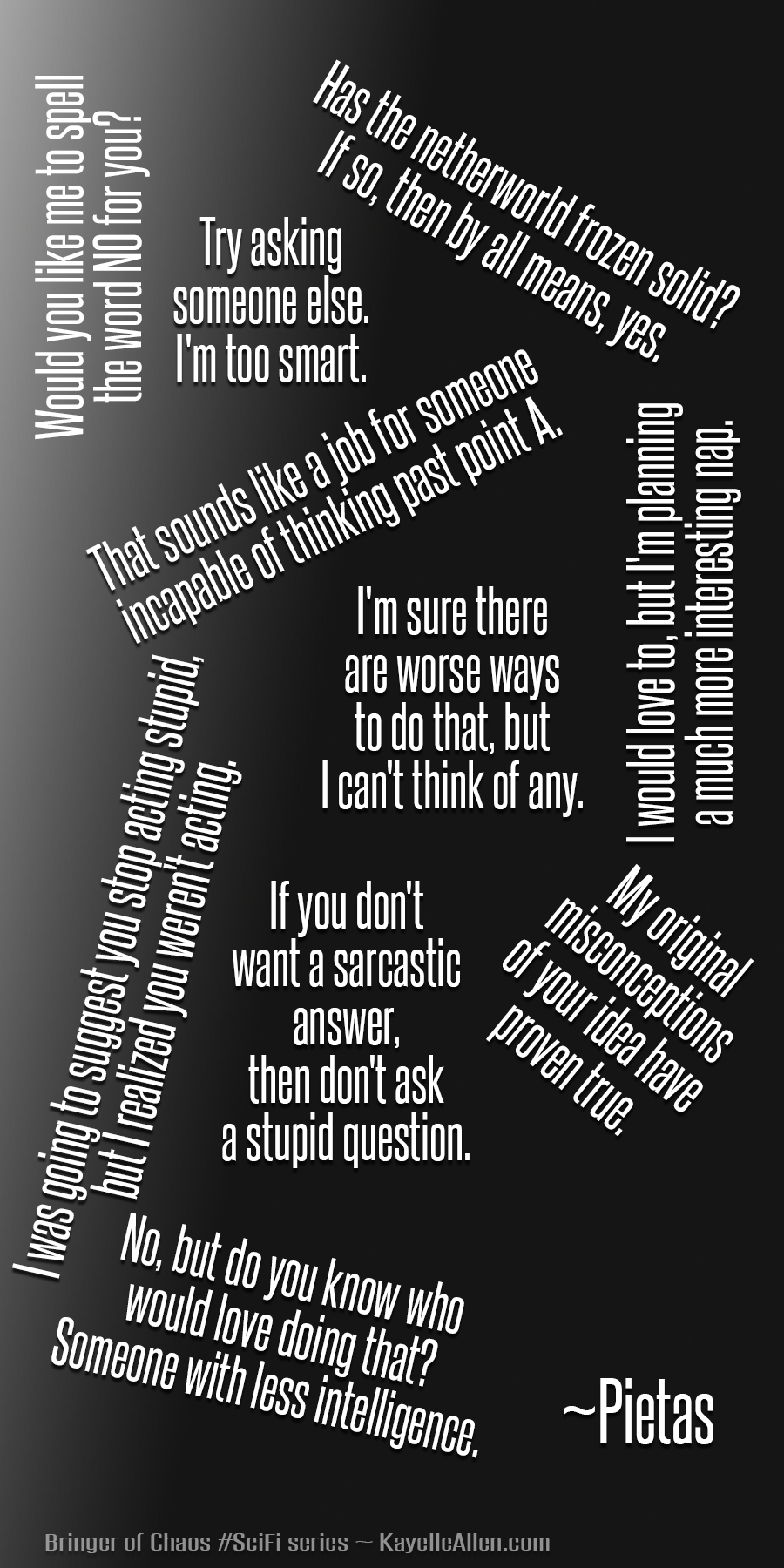 When I started writing about Pietas, he'd been a villain in other books, or at least a bad guy with serious issues. But after writing a couple of stories where he's the actual hero, I know him so much better. One thing I was surprised by is how snarky he is. I thought the immortal king would be much more dignified, but it turns out that around those he trusts, he can more than snarky.

Snarky is as Snarky Does

In fact, I started writing the Bringer of Chaos series so I could understand him. I was working on a book in the Antonello Brothers series and could not get Pietas to do what I wanted him to do. He wouldn't be the villain, no matter how much I tried to write him that way.

In exasperation, I told a friend about my problem and she suggested interviewing him. She'd call me on Skype and I would answer as Pietas. I would role play the character and free associate his answers. It opened my eyes to an entirely new aspect of my immortal king.

The Bringer of Chaos series was born from that interview.

An anti-hero is a protagonist but one who doesn't have the usual characteristics that would make them heroes (or heroines). Batman is a perfect example. He's a vigilante. He works outside the law. But we all root for him.

Here's what I've learned about writing anti-heroes in a nutshell. They have:

With Pietas, I started listing his flaws and decided which two or three would be the ones I'd focus on. What are they? His are many, but I'll start with one that I showed on the first page of Origin of Pietas: Bringer of Chaos.

At her mispronunciation of his name, he gritted his teeth. "My name is pronounced Pee-ah-toss, thank you. Not Pie-ah-toss. Pee-ah-toss. It's six letters. How hard is that to get right?" He stormed away from the podium.

By having him react strongly to the error, it reveals one of his flaws and a bit of his character.

Pietas often chooses insults over tact. One way that shows best is when he's asked to do something he'd rather not do. Here are ten snarky ways Pietas might tell someone "no."

Pietas is lovable despite his mistakes, and he forgives mistakes in others. Here's a quick excerpt from Forged in Fire: Bringer of Chaos for example. In this scene, Joss, one of the warriors with whom Pietas has had a long relationship, keeps taking them in circles on the way back to camp. His usual snarky attitude gives way to tenderness.

"Joss, you've been saying 'not far' for hours. Did I not teach you to mark trails?"

Oh, but it would. She wouldn't mean for it to happen, but it would. He'd tried for centuries to teach her how to find her way, to no avail. He kissed her cheek and drew her into his arms, savoring her warmth.

"Joss." He placed his mouth near her ear. "You couldn't find your way out of a round room with one door."

She jerked up her head and looked at him, eyes wide.