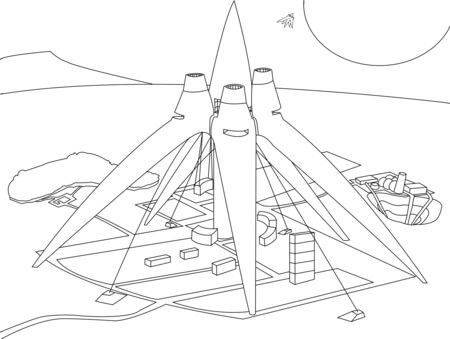 Niric presents a beautiful blue and green vision from space, and its new colonists are making great headway in creating well-designed and eco-friendly towns.

The Terraformer's Circle of Fellowship takes great pride in creating worlds with cities and roads planned for expansion. 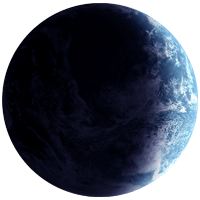 From the journal of Nim, Terraformer and wandering artist
I have a new digital notebook that I can draw with and was able to get the look of the colony on Niric. From what they tell me, the ship colonists came in can be taken apart to form the new city. Engines will be split up and made into power plants for five sub-cities.

(Journal continued...)
As you can see, most of the buildings slide into place after the base is built. To the left of the ship is a greenhouse that has raised a forest and to the right is a deep-core mining operation. Valuable resources for the fledgling city come from not only the ship but also the planet's crust.

In the background, LRC-11246 (Long range colony) is making its scheduled landing after a year of preparation. There are over two hundred ships like these which will land over the next ten years. After I've taken in the sights, I'm booked on a sleepliner to Kyrenie.