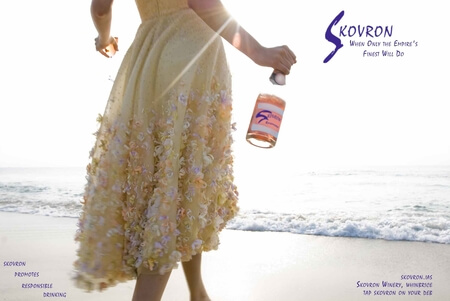 Whinbrice, a bright blue world with fertile oceans and landmasses.

The Skovron stadium opened in Birit 4664, only days before it hosted Wind and Thunder's Claw Rock Tour. Over sixty-four thousand people attended. The stadium's unusual spired arches permit outdoor seating in good weather, but a weather-resistant force field can generate within four seconds of a drop of rain. The underside of the arches can also render holographic images, permitting all seats to have an unobstructed view of the stage. 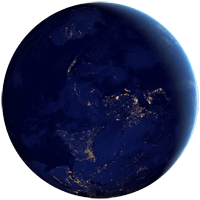 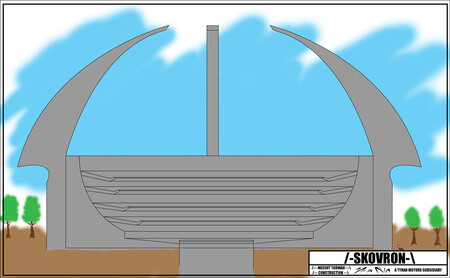 This cutaway view shows the Skovron Stadium after its renovation by Meesht Tormah Construction, a subsidiary of Tyran Motors. To get an accurate picture of the stadium's size, note the human figure above the letter "N" in Skovron. (Click to view full size)

Wind and Thunder's opening number using the stadium's holosystem to create life-like clouds and lightning flashes. When the group came on stage, lightning appeared to arc over their bodies. One by one, they thrust their hands toward different parts of the stadium and the holosystem cast the "lightning" over the audience. The effect was so realistic, hundreds of attendees ran for the exits. Paramedics treated several for panic attacks. The effect was dropped for the second show.

During that program, lead singer Gelina Fasra's voice rose so high that a window in the control panel shattered. The band's security company, For Women Only, immediately shut down the show and hunted for snipers.

The crystal-based ground on one continent produces fine wines that are sold empire wide. Luc Saint-Cyr owns a large vineyard there. Skovron burgandy is among the finest in the empire.