Natives on one side of the world called their planet Kivahndo. The other side called it Passat. Neither group knew the other existed.

In 4647 tradestandard, when the Conqueror absorbed the planet into the Tarthian Empire and brought the two hemispheres of people together, fierce fighting broke out between them. 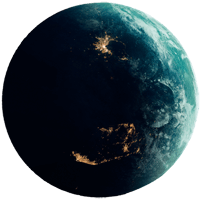 Each group believed the other had lied about their origins on the planet. Neither had any written or oral history mentioning the others, yet genetically, the groups were identical. How their world managed to evolve without leaving a history as to their shared background is a mystery.

Deepening the curiosity is the fact that their languages are based on Etymis, the tradestandard language of the empire.

Because Kivahndo-Passat is located so near the edge of the galaxy, its night sky is almost devoid of stars during some seasons and completely filled with them during others.