A sports and entertainment arena similar to a habdrill orbits the planet, and live feeds from The Virtual Dome are broadcast throughout the mining colonies and fed to the entire empire via Imperinet, the Imperial Internet. 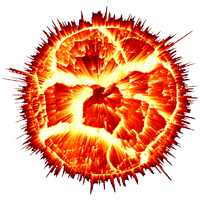 The myth that Sanity I, II, III and IV destroyed themselves in a civil war is false. They were surface-stripped and mined for raw materials, and exist now as asteroids in the Sanity system. The name origin is lost, but legend says Sanity IV began as a slang term in a song often sung by miners.

The wandering artist of the Tarthian Empire (Nim) shared this rendering of the habdrills.

Miner City is a collection of domed habitats, called habdrills. Each habdrill is an independent district, populated by up to 10,000 individuals. Habdrills are transported to different worlds via a habship. When they arrive, they detach and anchor themselves to the planet, moon, or asteroid being mined. Trade secrets long held by the miners prevent explanation of the technology here.

Initially connected to each other by tubes built after anchoring, the habdrills are merely part of one larger city. No worker is actually a resident of the world where he/she works, but is an empire citizen of Miner City, an independent world of its own. So, even though one million people live and work on Sanity IV, not one of them is a resident of the planet.