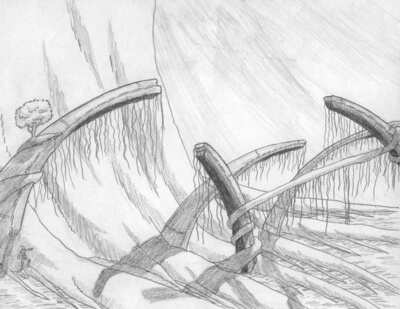 Archaeological digs on Detiza and several other barren worlds in the Tarthian Empire -- and all the non-human ones (Tyris, Felidae, and Ezraki) -- uncovered the ruins of towering arches. (See picture below) Natives on inhabited worlds all called them the Gates of Life. 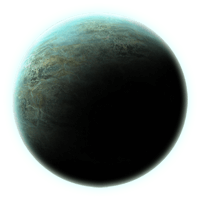 It is speculated the "Gates" originated as monitoring devices for tracking the progress of genetic mutations, but no true use is known. Rituals of "passing through the Gates" after birth are common to Tyrans, Chiasmii, and Kin alike.
All three worlds have legends that link the Gates to a god who descends from the sky in a burning chariot. The Tyrans called him Sandargen, the Chiasmii Arjensa, and the Kin Adel Jansaara.

When translated to Etymis, the tradestandard language of the empire, all these names mean Saint of Silver. A detailed description of this saint's arrival suggests a spacecraft. According to the legends, he was the size of a god, and had white hair. He always wore silver, and demanded a sacrifice of two virgins, male and female, which he took back to the sky with him.

For an idea of the true size of the Gates, note the bottom left corner of the drawing.

Those who did not please this "Saint" or had failed in worshiping at the Gates were punished severely, and some were killed. When generations passed without the Saint of Silver's return, the inhabitants destroyed the Gates.

Gates were also found on the planets Ohy and Sanity IV but there is no evidence that intelligent life ever existed on either of those worlds.
What happened to the inhabitants is a mystery that is likely never to be solved.