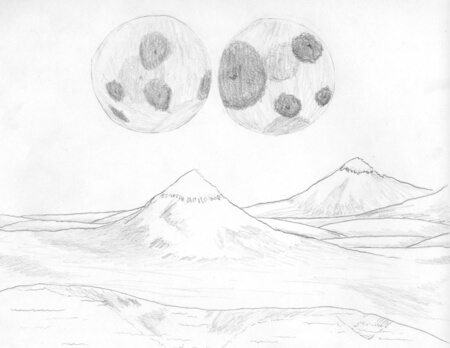 An Ezraki legend says that a jealous god placed a curse upon two lovers, San (red/female), and Pter (gold/male), so that they could never touch one another. According to the story, the other gods took pity on them, and raised them into the sky as moons.

There, they race across the sky side by side, only touching when a total eclipse occurs. The inhabitants refer to this as Sanpterdroit, and it is a world-wide celebration. 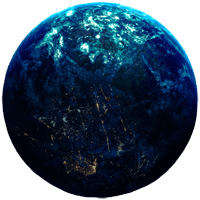 The two moons always rise and set at the same time, and appear to be the same size in the sky. However, the gold moon, Pter, is larger than the red moon, San, and only seems the same size because San is closer to the planet.

Inhabitants are called Chiasmii. They are, without exception, blond and fair-skinned. Truly androgynous, they are mother to one child and father to the next, favoring first one gender and then the other, occurring in two phases named after their moons, San and Pter. About twenty percent of the population consists of twins. With their race's uniformly blond appearance, first time visitors often have difficulty telling inhabitants apart.

From 4648 to 4653 tradestandard, the Chiasmii were the subjects of genetic manipulation in a program that came to be known as the Sabbath Experiment. A select group were actually impregnated with their own eggs/sperm and the resultant fetus altered by adding additional DNA. Speculation abounds regarding the children born during this time. Protestors started a fire which destroyed the complex utterly. No records survived.

The Chiasmii's dual genders have far-reaching consequences in their society (i. e., workplaces, and hours geared first to child care rather than the convenience of business). Their immune systems prevent every disease from the common cold to cancer, resulting in medicine focusing on injury-rehabilitation, genetics, and natural cures such as herbs, massage, and chiropractic. They invented Empas-assisted natural childbirth, during which a doula links the mother and fetus.

Before the Conqueror arrived in 4648 tradestandard, their society was non-violent, which they attributed to the fact that all could feel a victim's pain. Their gift of Sympas enables them to feel the pleasure or pain of others; and Empas reflects their own. Far from granting them immunity from harm, those attributes ensured their slavery.

They are commonly called Androgs.