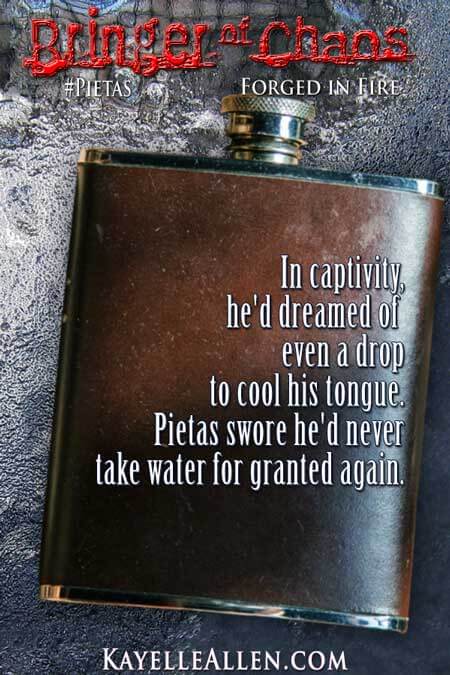 A canteen of water and a friend #Pietas #SciFi #MFRWHooks

This week’s MFRW BookHooks offers a sneak peek at Bringer of Chaos: Forged in Fire, my upcoming military science fiction novel with romantic elements. In this scene, the not-quite-human Six offers a canteen of water to the immortal king. Four other immortals are watching. The scene is from Pietas’s point of view.

Six slid their canteen off over his head and held it out to Pietas.

Accepting anything from a human, an altered one at that, had violated every instinct at first. To take from an enemy, yes. Always. Let one give you something as if you needed it? Admit a weakness before an enemy?

But this was Six.

Ultras could go days without water, but they consumed it when they had it. He wiped one dusty hand across his mouth. The satisfaction of assuaged thirst never failed to please. What simple things in life brought pleasure! In captivity, he’d dreamed of even a drop to cool his tongue. He’d sworn he’d never take water for granted again.

Six had offered water to their companions during the climb, but the entire lot refused anything a mortal’s lips had touched. Yes, Six was a quasi-immortal, but to the others, that gave him even less status.

Pietas wavered on few things, but on this? Should he call the man human, mortal, quasi-immortal, or ghost? He’d elected to choose as the mood struck. But one in particular annoyed Six.

“Thanks, ghost.” He thrust the canteen against Six’s chest.

Staggering, he swore in Spanish. “Find another name for me.”

“Tell me your mortal name then.”

“You know I can’t.” Six scratched his cheek. “Gotta protect my family. If your kind knew who they were, they’d slaughter them. You wouldn’t, but them?”

Now they were getting somewhere. “So you do trust me?”

“Pi, there’s more honor in your left big toe than your entire race combined.” He tipped up the flask but then paused. “No offense.”

“None taken. But we’re stranded, my friend. Unless a miracle happens, by the time we get off this world, your family will be long dead.” He added, “No offense.”

Six finished his drink and plugged the container. “None taken. Sorry. Can’t do it.” He lifted the strap back over his head and settled it onto his shoulder, the canteen at his back. “Seriously, Pi, your people hear you call me you-know-what, it’ll give away I was Ghost Corps. We both know what they’ll do to me.”

Bringer of Chaos: Forged in Fire
What if you were marooned on a barren world? No food. Few survival tools. You’re genetically engineered. No matter how agonizing the wound, you survive. No matter how you die, you come back.
It could be worse. You could be here alone. But that’s the problem. You’re not.

Join the Forged in Fire tour and get free goodies!