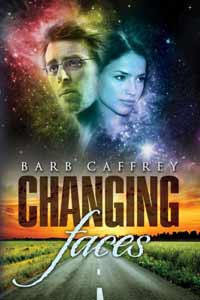 Or, Why Elaine is a Bisexual Character in Changing Faces by Guest Author Barb Caffrey
—
When Kayelle Allen and I talked about a guest blog in support of my new LGBT-friendly novel, Changing Faces, I wasn’t sure at first what to write. Then it hit me: Most people I’ve talked to, when they hear about my heroine, Elaine Foster, ask me, “Why must Elaine be bisexual when she’s already gender-fluid at the start of your book?”

There’s actually a good reason for that.

Bisexual Character – for a reason

You see, my premise in Changing Faces is that people should learn to see souls. Not bodies. And that a transgender couple—in this case, one created by angels, ’cause it’s a fantasy—is most likely to learn to do this first. Because who they are on the inside doesn’t necessarily match who they are on the outside.

u protest. “You were going to talk about bisexuality. Why aren’t you?”

I’m getting to that. (Honest.)

It seemed to me when I first started writing Changing Faces, that Elaine had to be bisexual. She already could see souls, to a degree. She already knew how to measure the worth of a person beyond his or her face, and had dated both men and women.

That, in a nutshell, is what a bisexual person is.

Now, as to why she still couldn’t accept herself as gender-fluid easily? Well, as a society, we’re only beginning to learn about people who don’t always feel male or female. Sometimes they feel one way, sometimes another, maybe a third time they have a mix of both traits. Gender preference is not the same thing as sexuality; not by a mile.

So, Elaine has dated women and men. She sees the worth of a person and is not automatically attracted only to one sex. In a way, Elaine isn’t attracted by anyone, sexually. She’s only attracted mentally and emotionally, and then, much later, sex comes into the picture. But that’s not that strange, considering she’s a scholarly sort. She can see into a person, and evaluate who that person is, in a way most people don’t. She doesn’t even think to do this because how she views people is part of who she is.

In other words, the story demanded that Elaine be bisexual. So she is.

—
Barb Caffrey is a writer, editor, and musician who holds two degrees in Music. She has a particular fondness for the clarinet, lived in Nebraska for the better part of three years, and appreciated the ability to combine both her loves with the writing of Changing Faces.

Her other books are An Elfy on the Loose and A Little Elfy in Big Trouble (otherwise known as the Elfy duology), while her short stories have appeared in a number of places (most recently in Realms of Darkover). She’s also the co-writer of the Joey Maverick series of stories (with late husband Michael B. Caffrey), so the next story you might see from her could be military science fiction—or better yet, military science fiction with romance. She lives in Wisconsin.
Where to find Barb Caffrey

(Note from Kayelle: Barb has been my editor for three books now and if she’s willing, many more. FYI – she would probably object to the adverb “many” in the previous sentence. Just saying.)

4 thoughts on “Bisexual Character: Why Write One? @barbcaffrey #amediting #author”