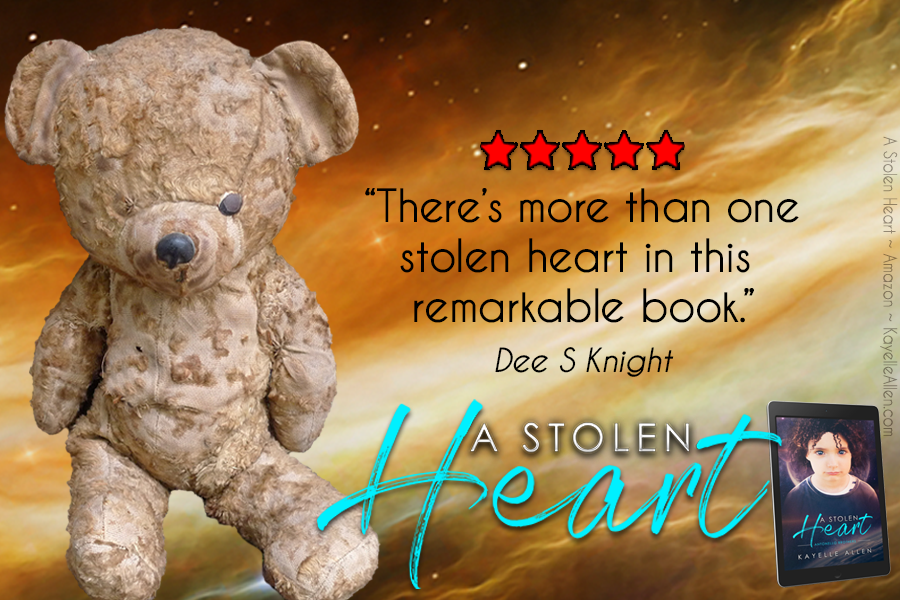 How nice after the months of writing to have a good review.

Reviews for A Stolen Heart

A former space pirate who’s gone straight rescues a vulnerable child adept at breaking into things. By protecting the boy, Luc unlocks secrets that threaten to topple the powerful king Luc once loved. For the child's safety, Luc must send the boy away, far from danger. Nowhere near him. Even if this little one has already stolen his heart...

Here's a short snippet from a review or two of A Stolen Heart.

"There’s more than one stolen heart in this remarkable book! ... I loved every bit of this story! Highly recommended." -- author Dee S Knight

"The core conflict in this book is the disconnect between who Luc is and the feelings he has for Senthys. Ms. Allen does a wonderful job depicting the child's remarkable abilities and winning ways, and exposing Luc's softer side as he falls in love with the boy." -- author Lisabet Sarai

"...the youth and playfulness of an immortal King contrasts against the experience and maturity of an age worn subject... The strength of characterization and plot thickens as the story brews... This galactic mystery is sure to hold true on the what the title claims; the readers are sure to end up with 'A Stolen Heart'!" -- FD (blog review)

A Stolen Heart, along with the entire Antonello Brothers series, is $ .99 through the summer.

This review is biased as all get out, but it's one of my favorites! This is what my editor, Barb Caffrey had to say about the book after she tore it apart and then handed it back to me. She is gentle when she tells you to fix something, but you aren't getting by with anything, believe me. Here's what she had to say.

"Folks, I'm glad to talk about my friend and fellow author Kayelle Allen. I've edited at least six of her books (maybe more; I've lost count), and I'm always happy to work on them because they're well-detailed, well-organized, and a lot of fun. But A Stolen Heart, which is all of the above, is even more than that. It's about optimism, in the face of great loss. It's about the blessings of family, even when you don't think you deserve it. It's about personal growth, and self-sacrifice, and finding your own way in the world…most of all, it's about figuring out how to love yourself, warts and all, even when you've done something so horrible you have nightmares about it many years after the fact." -- editor Barb Caffrey

A review can empower

Yes, even when someone points out something they thought needed improvement, that's a good thing. One reviewer thought I shouldn't have mentioned two characters from a previous series. I can understand the reasoning, especially if a reader doesn't know them. I brought them into the book because these characters crossover into the series in later books, and because they are the single most powerful influences on these characters. Without them, there would be no story now.

The challenge is to consider how to use reviews to create a better story next time. In a review of a different book, one reviewer said the story lacked enough science fiction elements. Since about 70% of the story took place on an alien world where they had nothing to survive with but rudimentary gear in a backpack, there wasn't much sci-fi to include. But in future books, I recalled the advice and made sure I had plenty of that element.

Good and bad reviews are part of writing. Learning to grow a thick skin and be a professional is what separates the wannabe writers from the serious ones. If you've read this story and haven't yet left a review, I'd love it if you would. You can share it on Goodreads, Amazon, or your own social media. I'd love to hear what you think, good or bad. Send me a link!

Be sure to check out the other authors below in this blog hop.