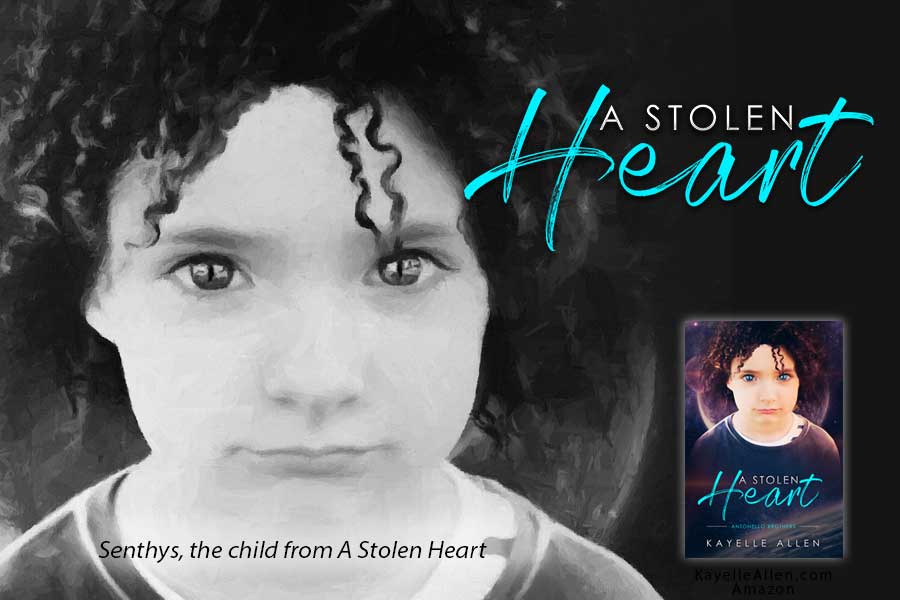 Party time! A Stolen Heart is finally a new release. The book went live on May 11, 2020 and is exclusive on Amazon. On sale for 99c, or free if you're a member of Kindle Unlimited.

The premise is simple: a former space pirate who’s gone straight rescues a vulnerable child adept at breaking into things.

If you liked seeing the bad guy in Despicable Me transform into a soft-hearted dad, you'll like A Stolen Heart. Luc's minions aren't yellow. They're thieves.

Setting up the scene for today's excerpt:

Luc Saint-Cyr interfaces virtually with Shohn, his idBot liaison. Although Shohn speaks fluent Etymis (English), it's not the native tongue of the Kin female. (Sayr te means "forgive me" or "I'm sorry" in Felis.)

Excerpt from the new release, A Stolen Heart

During the ride into Miraj City, Luc pulled out his mobile and scrolled through the list he'd uploaded from the paper in his pocket. He forwarded one item to his assistant, and added the note about the penthouse to his own to-do list. The mobile buzzed in his hand, showing the name Shohn Lexius.

He answered, voice mode. "What's up?"

"A bit of intel. I know we're meeting later, but this will only take a minute. I think you'll want to hear it."

He put the device on holophone and she shimmered into view. "Go."

"Sayr te. Forgive me." He smoothed his jacket. "You're so fluent in Etymis, I forgot you might not get idioms. In this case, 'go' means the same as 'talk.'"

"Oh. Good to know. I anticipated you'd want a background check on"-- She looked at something off-screen --"Senthys Antonello."

"What are you? A mind reader?"

"Oh, no, sir." She picked up a note-reader. "I try to anticipate what'll be needed next. What's the next logical step. Prepare for it best I can."

"Do you have relatives needing work? I could use a dozen more like you."

Inclining her head, she lowered her ears in a Kin thank you. "I'm one of a kind."

"You can say that again."

She gave him a curious look. "Idiom?"

"Means I agree." He gestured toward her. "So you know I took custody of the boy."

"Sir, I know your shoe size, what sort of pickles you like and the thread count on your sheets. You signed papers for him at the Guild. It wasn't hard."

In his other lives, no one had known squat about happenings within Guild walls. "You scare me a little, Ms. Lexius."

One ear flicked back. "Is that good?"

"I'll let you know." He set his mobile on handsfree and dropped it into a pocket. "What do you have?"

"I dug up the name of the place where the boy lived from birth until he was bought by the Guild. He--"

"He was purchased in a group of thirty children. Twenty-seven humans plus him."

"There were thirty total, but two are unaccounted for. Not sure who they were or whether they were human." She tapped a screen. "Looks like they were counted when they left the children's shelter where Senthys was reared, but I have no record of them reaching the Guild. No record of names, either. Just the count."

"Were they sold before the Guild got them?"

The more he learned about the doings of his Guild, the less it felt like the one he knew. His Guild had been honorable. Like a family. This felt more and more like a faceless organization. Since when did family sell its most vulnerable members?

"But sir, I'm looking into it. That two children can disappear makes my claws itch. If they're safe, I want to know and if they're not-- Well, I'll let you know either way."

Be sure to check out the other authors in this blog hop - links below.