A 7-7 Post (Game of Sevens) WIP: Return of the Vhalgenn #amwriting 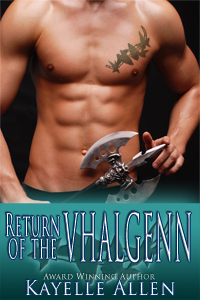 I was tagged on Facebook for the Game of Sevens and decided to bring it here. I was supposed to go to page 7 or 77 of my latest manuscript, then go down 7 lines, copy the text, and post the next 7 sentences. Mine is from Return of the Vhalgenn (sequel to The Last Vhalgenn).

Knowing what comes before and after, it’s surprising how well those sentences reveal the plot. But first, here’s what the book is about.

Return of the Vhalgenn
When the sacred site where Kierhe’s people worship turns out to be a portal to another dimension, he must decide whether to release the Fae, or keep them imprisoned as the gods he’s come to love.

Kierhe grew up hearing stories of Qarth, dragons, and venturing into the dreaded Denauerman Flats. As one of the famed Fae Guides, he makes a living guiding pilgrims from all parts of Qarth and Kellindahr to worship at the Gates of Life, and showing them how to pass their children beneath them as the Fae commanded. So when outsiders want to dig up the Gates and release the Fae, Kierhe straps on his sword and prepares for war. The summer solstice is imminent, when the veil is thin. The Fae have talked to Kierhe in the past, and he worships them. [pq]What will releasing the gods unleash?[/pq] Should he ask the king for an army to force the enemy from the holy site, or allow them to stay? What if they destroy all he holds sacred?

Theena is also a Fae Guide, and she’s as good a fighter as Kierhe. His ego gets him into scrapes, while Theena tends toward cautious. With Kierhe in charge, there’s bound to be a fight before long. He persuades better with fists and swords than he does with words. Hopefully, Theena’s level head can keep them out of war. If only Kierhe could see she’s a woman as well, but with the Fae popping up unannounced, and an enemy threatening everything they hold sacred, love will have to wait.

Intro to Kierhe:
As a newborn, Kierhe Dahryc Loc Ohra clan Draig was “passed through the gates” — a sacred rite that protects children and provides a blessing from the Fae. His Aunt Raik was responsible for taking him to complete the ritual. He bears an ivy tattoo on his chest, proclaiming his loyalty to the King of Qarth and Kellindahr, and against the “Treacherous Queen” who was beheaded not long after Kierhe was born. Unknown to Kierhe, the queen was his mother, and everything he has been reared to believe is a lie.

Here is my actual “7/7” portion of Return of the Vhalgenn. Kierhe is recalling a moment in his childhood when he saw one of the mystical Fae.
—–

His Aunt Raik had told him the old tales of dragons raiding south out of the northern wastelands, gliding over the plains and calling up storms with their songs.
She’d filled his head with stories of crossing the forbidden Denauerman Flats, venturing into the mountains, and riding for days, lost and dazed.
He hadn’t believed any of it until that moment.
Seeing the Fae standing there before him somehow made every tall tale he’d ever heard seem possible.
The hair on the back of Kierhe’s neck stood straight up.
Kierhe and the Fae regarded one another for a long moment.
The Fae turned to look over his shoulder, as if checking to see where Kierhe had been looking.

This book is underway and should be completed soon. Its prequel is The Last Vhalgenn (featuring Kierh’s Aunt Raik).
Duty to king and country has shaped Raik’s life since birth, but to protect them, she must perform a ritual that betrays all she holds sacred.
Available exclusively on Amazon http://bit.ly/SciFiFantasy_Vhalgenn