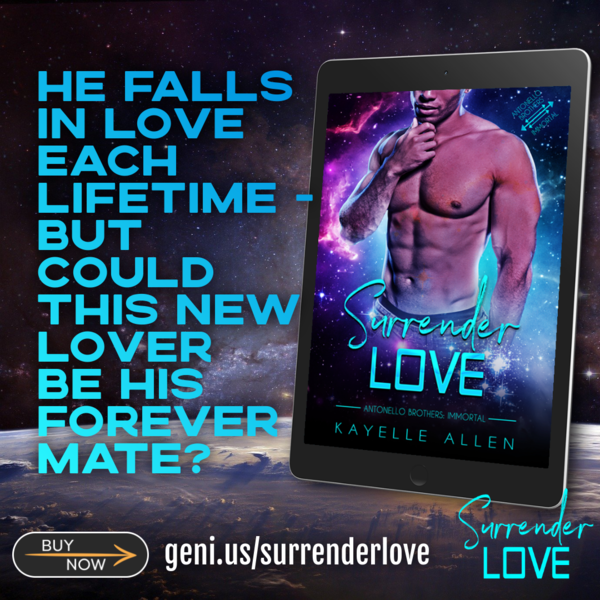 Izzorah has never spent money on clothing. He's a rockstar who lives in jeans and t-shirts, while Luc's ex was a fashion model. The two men could not be more different, so when Luc suggests having clothing made for Izzorah, he balks.

Luc stroked Izzorah's face, needing to touch him. "I'll have my tailor come out. Maybe have Icia Teoh do a few designs for you. She'd like playing with you, no doubt."

"Figure of speech. She'll treat you like a gorgeous Kin doll. Beautiful and perfect. She'll be delighted to design for you."

"You mean designer clothes made for me? But my cousin Trey says Icia Teoh's expensive."

"No, no. Icia Teoh's not expensive. She's outrageous. And worth every drak." Luc braced a hand on the wall on either side of Izzorah. "Kiss me."

Izzorah slid his arms around Luc's waist and rose on tiptoe to offer his mouth.

Having Izzorah against his body sent a shiver through Luc and he set both hands on Izzorah's shoulders. Luc nuzzled the catlike ears. "You smell good."

Izzorah purred. "T'hahr, you feel good." He rubbed himself against Luc.

Pulling Izzorah up hard against him, Luc slanted his mouth across Izzorah's lips. His Kin lover yielded to his touch, digging his claws into Luc's shirt to hold him close.

When the kiss ended, Luc pulled out his shirt and examined the claw holes on the sides.

"Uh-oh." Izzorah drooped his ears but bared his fangs in a human grimace. "Sorry. Was it expensive?"

"It doesn't matter. Getting roughed up by you is worth it." Luc tapped him on the nose and pressed his brow against Izzorah's. "I'll spend a fortune on clothes because of you. You seem to like ripping them to shreds."

"Then you won't mind this." Izzorah used one claw to slice off each of the shirt's buttons, which made tink sounds as they hit the floor. The undershirt he gripped with one hand and sliced through with the claws of the other.

Bare-chested, exposed before his lover's eyes, pride mixed with a vulnerability Luc had experienced with no other lover. Not from fear, nor from Izzorah's fangs or claws, but from Luc knowing he could no longer shield his heart.

"There." Izzorah dusted off his hands. "Much better."

Luc's Kin lover purred. "Ffffftt, I hope so." He drew Luc down, into another kiss. The hot, wet mouth beneath Luc's tasted of strawberries and the sweetness that was Izzorah. His rough tongue was a reminder of his nature.

A little feral, a little innocent, all male.