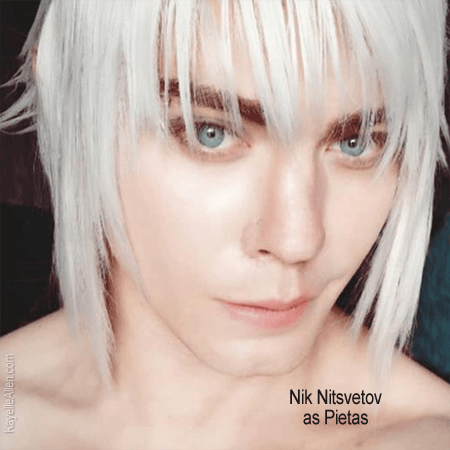 Okay, fangirl. How did the cosplay go? Well, @Nitsvetov was perfect. Me? Hmm #Cosplay #SciFi

Nik Nitsvetov is an award-winning cosplayer and a photographer. He portrayed the immortal king, Pietas, from my Bringer of Chaos series on September 1, 2018 in a live cosplay. I've had this character in my head since I started writing. It was fascinating to see him brought to absolute, perfect life.

Left and below: raw images of Nik as Pietas

On September 1, the Russian cosplayer, Nik Nitsvetov portrayed immortal king Pietas during a live feed on Instagram. I watched with my friend and colleague, Lisa Lowe (who was on with me via Skype). We each used Mobizen (an Android app) to record the cosplay.

Unfortunately, my WiFi cut in and out, and the image kept freezing. Lisa gave me a move-by-move account of what was transpiring. Good thing I was able to grab my gear and head out the door quickly. Lisa lives only 10 minutes away. I kept my phone on while driving so I could hear what was happening, and because I moved from WiFi to 4G, the signal started coming in quite clear. Before I'd left my subdivision, Nik started performing the ritual. I had my phone in a handsfree device but because the VERY last thing I wanted was a ticket, I was not watching and driving. Although I could glance at it (and did), when I saw him begin, I pulled off the road and watched. 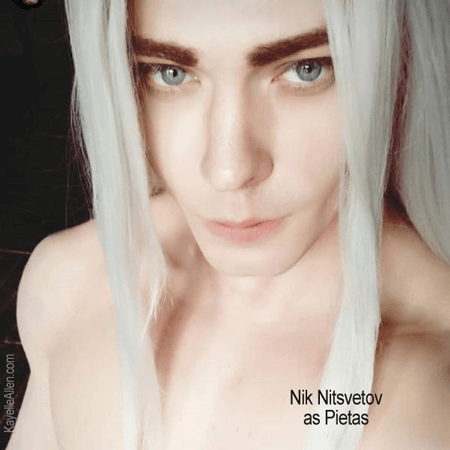 The moment Nik began moving into another part, setting up poses, I drove again. During that 10 minute drive, I pulled over no less than 3 times. Stopped way too long at a stop sign, and dared (probably) too many glances. When I arrived at Lisa's, we sat side by side and watched, commenting and exclaiming over the various poses and images.

Later, when we played back the recording, we were stunned to discover it had also recorded us. We had some good laughs listening. Most of the time, we were each speechless -- or reduced to phrases like Oh my god! Holy cow! Did you see that? ohmigod ohmigod ohmigod! (and to change it up - oh wow!). If I strung together everything we said, it would sound like a contest at a fangirl convention seeing who could sound the most amazed in less than three words.

Near the end, we discovered we could actually write something and Nik would see it or hear it from a friend who was recording. I sounded like a broken record here too: You are perfect. Perfect Pietas! That's so perfect! But at one point, I noticed a "hello" button and pressed it. A moment later, Nik smiled and said, "Hello, Kayelle." My super intelligent response? "Oh my god!" LOL

We didn't realize that he had a cold until about halfway through the cosplay. He coughed and Lisa worried aloud that he was sick. Of course, our immediate mother-hen selves lurched forward, ready to hand him a tissue or a cough drop or give him a hug. Too bad he was in St Petersburg and Lisa and I were in Atlanta. Nik kept going, kneeling on the floor for part of the ritual, bare-chested, water in his cupped hands dribbling down his arms as part of the scene. But now, we were both fascinated and worried -- what if the room was too cold? Would he get sicker? We hoped that cough was not serious but we also wanted him to keep going. Talk about mixed emotions.

The event lasted one hour, two hours short of anticipated -- but that was Instagram's doing -- not Nik's. He kept going after the live video ended and let us know only afterward that he had stopped a little short due to being sick. Pardon my overuse of this word where Nik is concerned, but he was perfect. Absolutely perfect.

I imagine if Nik reads this, he'll shake his head and then laugh at his crazy American fans.

Were the time, planning, detailing and work worth it? Absolutely. I would not change a thing -- except -- to hesitate less and trust myself more. Nik is kind and thoughtful and eager to reach out to his fans. He is professional in his work and a perfectionist who makes sure every part of an image is right. His photographer, Julia, is just like him. Watching her pose him, adjust the fall of his hair, the angle of his hands, the aspect of the light -- was as fascinating as seeing Nik himself. Whoever took the video -- thank you. It was wonderful being able to share the event.

Perhaps one day I'll have the courage to ask him for another cosplay event. I have a bazillion books to write about Pietas. This is an immortal who ages, then dies and is reborn young. I could keep Nik busy for a long, long time. I can't imagine anyone else portraying my immortal king. After all, Nik is perfect.

Hear Pietas (in his own voice) as he shares
several truths about himself and life.
"Finding the Voice of Pietas" coming soon