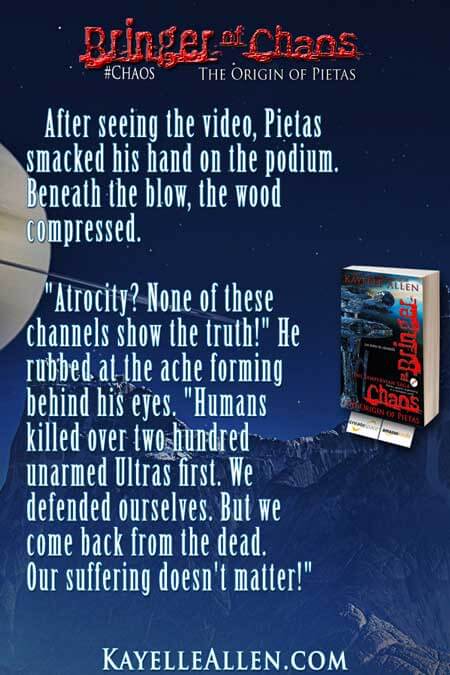 The Honor of a King #pietas #scifi #MFRWhooks

The honor of a king is more valuable than diamonds. As the about-to-be-king of his people, Pietas is zealous of his honor above all things. Strongly tied to that is his name. “Pietas” fits a king whose honor is his sole remaining possession.

The name comes from Latin and has a two-part meaning. The first is conscientious, duty, dutiful conduct, and scrupulous. The second is kind, gentle, and compassionate. Those who know lord Pietas ap Lorectic believe the first definition without hesitation. But the second? Well…

From chapter one, Bringer of Chaos: the Origin of Pietas

The announcer mentioned the upcoming peace talks on Enderium Six. “We hope Chancellor Pietas can be reasoned with at the talks this week.”

At her mispronunciation of his name, he gritted his teeth.

“Human families,” she continued, “have been evacuated from the station to protect them from possible violence.”

“I’ll show you violence.” Pietas cut off the video. “And my name is pronounced Pee-ah-toss, thank you. Not Pie-ah-toss. Pee-ah-toss. It’s six letters. How hard is that to get right?” He stormed away from the podium.

He cast off the heavy silk brocade of his robe of state. Silver threads flashed among teal and white as the supple garment billowed to the floor. He tore off the unadorned silver circlet denoting his rank, and tossed it onto a table. It clattered across the wood and knocked over a small ceramic statue of a six-headed dragon.