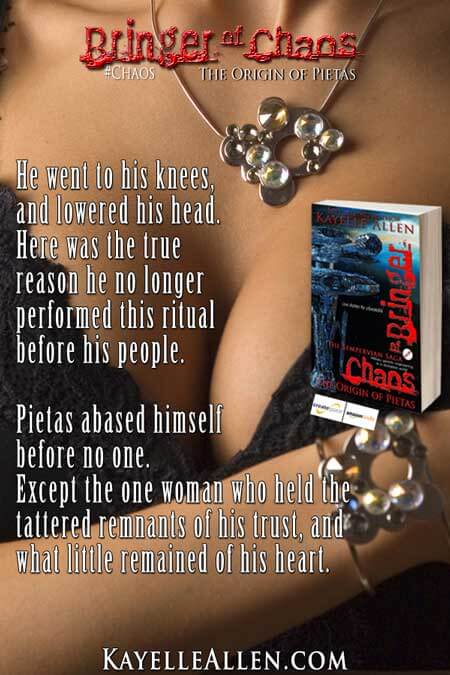 What little remained of his heart… #SciFi #MFRWhooks

is scene from Bringer of Chaos: the Origin of Pietas, the hero is performing a ritual to prepare for war. He’s asked his twin sister to assist him. The one woman who held the tattered remnants of his trust and what little remained of his heart. Yet no one had ever betrayed him as cruelly.

What little remained of his heart…

Dessy twirled the dagger. “You should let our people know you still do this ceremony. They’d be impressed by your devotion.”

“I don’t do it to impress anyone. I do it to ready myself for– Stop!” She had been sliding one fingertip along the edge of the dagger. Pietas removed it from her grasp, and examined the blade.

“Honestly, Pietas! I was just testing the sharpness.”

“I didn’t want you to cut yourself.”

“Not the point. If you’d cut yourself, I’d have to consecrate it again. It can only have my blood or my enemy’s.”

“You think I’m witless? As if I haven’t performed this ceremony with you a hundred times. And here I thought you were concerned for my well-being.”

She let out a harsh sigh. “Fine. Let’s complete the ritual.”

Dagger in hand, Pietas unfastened the clip in his hair, and let it fall. The wet tail slapped the middle of his back. He tossed the clip aside, placed the dagger on his palms, and offered it.

She poised her hand above it. “Who offers this weapon?”

She took it from him. “For whom are you willing to suffer?”

“I suffer for my people.” Pietas turned his cheek.

Dessy slid the knife tip along his face, from cheekbone to chin, drawing a thin trail of blood. “For whom do you bleed?”

“I bleed for my people.” By the time the first drop of blood had risen, the cut had healed, leaving no scar.

“What sacrifice do you offer as proof of devotion?”

He went to his knees, and lowered his head. Here was the true reason he no longer performed this ritual before his people. Pietas abased himself before no one.

Except the one woman who held the tattered remnants of his trust, and what little remained of his heart.

“I surrender my pride.”

Bringer of Chaos: the Origin of Pietas
by Kayelle Allen
Pietas is an Ultra, an all-but-immortal warrior who leads the fight against the oppressive human race that created his people. But when he’s captured and exiled to an alien world, his only ally is Six, a human who’s been as betrayed as he was. To cross the continent and find other Ultras, Pietas must overcome his centuries-long distrust of humans, and rely on Six. This mortal will either become his closest living friend or the human whose betrayal triggers all-out vengeance by the most powerful immortal ever born.
—
Read the first chapter https://kayelleallen.com/chaos-origin/
Available free on KindleUnlimited and in print
Amazon https://amzn.to/28QOTpb

10 thoughts on “What little remained of his heart… #SciFi #MFRWhooks”