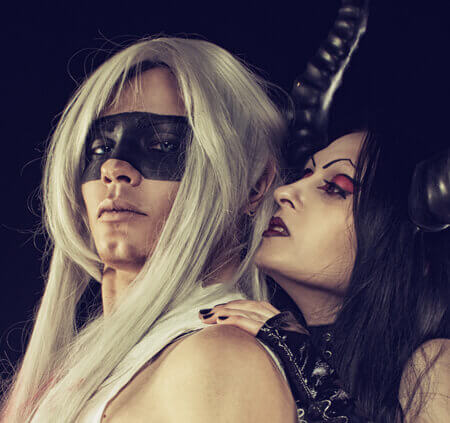 Mask? Hey, Bringer of Chaos. What’s up with that? #scifi

The Bringer of Chaos hero wears a black mask painted on his face. It covers his eyes, up to and over the eyebrows. Why?

What’s with the mask?

When I started writing about Pietas, the hero of Bringer of Chaos: the Origin of Pietas, I had no idea he wore a mask. The mask had never been part of my plan. But one day I was searching for a picture of an angel for a graphic design project, and came across this fascinating image of a fallen angel and a horned demon. Since the angel was male and had long blond hair, I was immediately intrigued. Often, angels are portrayed as sweet females who look heavenward with a devoted expression. They seem about as dangerous as milk. However, in Bible stories, one of the first things angels say when they appear is “Fear not.” Why would they say that unless they inspired some kind of fear themselves? And the only named angels have male names. So, yes, I was fascinated to see a male angel. I clicked on the picture to get a better look.

Lo, and behold (sorry, I couldn’t resist that) the person looking out from the image seemed to be staring straight into my soul. I zoomed in to get a better view, and in that instant I knew I was looking at Pietas, despite the mask. He seemed to be saying “What took you so long? I’ve been waiting for you.” Look at this face! Arrogance personified. Those teal blue eyes pierce. He’s a dead ringer for Pietas.

The photo shoot was a series of images between the one-winged angel and a horned female demon. The angel was being subjected to various bad things by the female, yet portrayed as sensual, rather than defeated. He was enjoying the attempted subjugation, but he wasn’t submitting. How like Pietas.

The problem was, why was Pietas wearing a mask? At that point, I decided it didn’t matter. I liked the image. I bought it and put it aside for later. It would be inspiration for the real character when I wrote him. However, I kept going back and looking at the picture, and thinking “What’s with the mask?”

Pietas is the Gamemaster of Peril, a real-time role-playing game my immortals use as a means of both passing the time and also as a means of manipulating human society. In their various roles within Peril, the immortals introduce certain aspects into society and culture to direct mankind. Why? Peril, in itself, is a mask. It hides the real reason the immortals are among humans. Are they there to subjugate the human race, and turn it to their own collective will? Pietas, as the leader, directs every aspect of it. A little scary, isn’t it? Doesn’t it ring true in today’s society, where we hear conspiracy theories and stories about the illuminati, and secret, powerful groups directing mankind?

When I realized the mask had something to do with the role Pietas held in Peril, I went back and bought more images. The model’s name is Nik Nitsvetov, and he’s Russian. I would love to find images of him in other poses with and without the mask. I think I have everything he’s ever done. [editor’s note: Nik has since done a private cosplay as Pietas – see images in sidebar]

I’m writing books about Pietas. The first takes place in the distant past of my universe and is an origin tale about my immortals. His love story is very sketchy right now. I think I know who Pietas falls in love with, and in the current universe, that person is not a fan of his at all. In fact, that person is trying to undermine his authority and recruit his people away from him. Not a good way to start a relationship. Again, how like Pietas. He never does things the easy way.

Below is an excerpt in which he applies the mask. This is the first time he does it in Bringer of Chaos. The second time, it’s with an entirely different flair and for different reasons. Both scenes pack emotional wallops.

His platinum hair streaming down his bare chest, he lifted his hands, palms up as if praying.

He passed a hand through the flame, and hissed at the searing heat, relishing the pain. He cupped his hand over the flame’s source, and held it until the fire went out. The burns on his palm cooled, and the skin healed. Of all the elements, fire alone had power to linger on an Ultra’s skin. He welcomed it as a symbol of victory.

He submersed, and rose, head thrown back, face lifted to the sparkle of stars above.