Details, details. Ritual is everything #scifi

When I decided to write about the immortal warrior Pietas, who’s been the villain in several of my books, I thought he might have issues with details. You know, the type that makes you adjust and readjust a picture, straighten a towel, or minutely focus the volume of a song. Boy was I right! And I thought I was insistent on details? In the beginning of the book, Pietas performs a ritual before entering into peace talks with a group of humans. The ritual is designed to help him focus, and he repeats it later in the book. It’s when he puts on the mask shown in the cover. Pietas has a mantra that he repeats a half dozen times in the book, to remind himself he will survive; he will overcome. His singleminded devotion to duty makes him one of the most implacable, indomitable warriors ever born.

After the ritual and its details are complete in the beginning of the book, his sister (who aids him) asks if he’s ready for the peace talks. Pietas says, “No. I’m ready for war.” Here’s a peek at the ritual.
—

He shed his silk robe and let it fall at his feet. Nude, his platinum hair streaming down his back and chest, he lifted his hands, palms up as if praying.

He passed a hand through the flame, and hissed at the searing heat, relishing the pain. He cupped his hand over the flame’s source, and held it until the fire went out. The burns on his palm cooled, and as he watched, the skin healed. Of all the elements, fire alone had power to linger on an Ultra’s skin. He welcomed it as a symbol of victory. 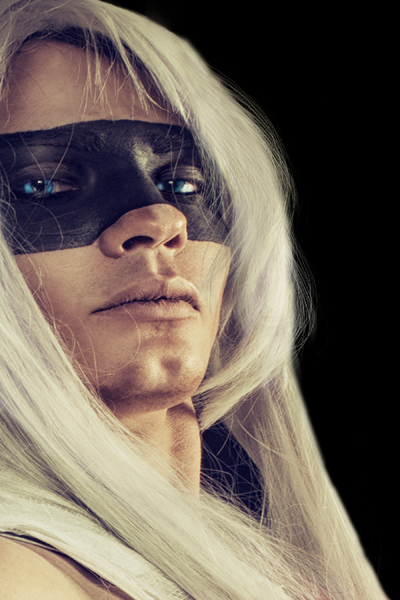 submersed, and rose, head thrown back, face lifted to the sparkle of stars above.

Satisfied with his looks, Pietas pulled on a pair of loose white lounging pants. With a deep, cleansing breath, he opened the door. Damp, shirtless, barefoot, he padded into the adjacent room.
—
Bringer of Chaos: the Origin of Pietas
Two enemy warriors: one human, one immortal. Different in belief, alike in spirit, marooned together on an alien world.

Imprisoned and in isolation over a year without food or water, the immortal Pietas survives. Though broken in body, his intellect and will are intact, thanks to Six, the special ops warrior who captured him, but kept him sane. The warrior had no hand in his deprivation and, like Pietas, was betrayed by his own kind. When Pietas is abandoned on an alien world with nothing but his honor–and Six–he must find and rejoin other immortal exiles. After centuries of war, Pietas detests humans and kills them on sight, but he is too damaged to continue on his own. Though he despises needing help, he allows Six to nurture and restore him to full strength, and then accompany him. As they cross the planet together on foot, the immortal begins to wonder if he has found his first human friend, or if Six is loyal only because Pietas could keep the others from tearing him to shreds. This human will either be his closest living friend, or the one whose betrayal will trigger all-out vengeance by the most powerful immortal ever born.

Immortal. Warrior. Outcasts. Traitors took everything. Except their honor.
Amazon http://amzn.to/1R8DAbb
CreateSpace http://bit.ly/boc-origin-csp
—
Join my Romance Lives Forever Reader Group and you’ll get sneak peeks of new books, plus find out about special contests just for members. There will be exclusive giveaways for members prior to a book release. When you join, you get a free book right away, and two the next day. Want other options to know when a book is released? Join AuthorAlarms and get one email when a new book is out. Follow me on Amazon — Twitter — Facebook.