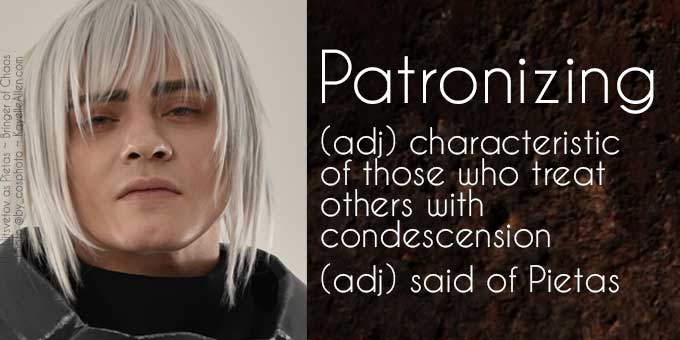 Pietas, the immortal king, has a good bit of snark. You can read that post here. He also tends to be patronizing and condescending and is not above outright insult.

Writing a character with snark and a tendency to be imperious is a delightful experience. But when does that attitude go too far?

How do you know when to dial back a haughty character's arrogance?

A patronizing attitude reveals a character flaw, but it can be entertaining as well. How do you keep from going overboard? Here are 3 ways I found to temper my temperamental immortal king.

1 Do not use a patronizing attitude for no reason. Nothing alienates a reader faster than a character who is nasty to others just for the sake of being nasty. Make insults in the scene spring from an obvious need or cause. In the opening of Origin of Pietas: Bringer of Chaos, Pietas offers a direct insult to his father, but it's in response to his father's callous treatment.

2 Do not substitute a patronizing attitude when a scene calls for action. An action scene such as a fight or physical action can do much to advance the story. If you have your character just be snarky instead of dealing with danger, it comes off as negativity, or worse, as cowardice. Nothing says that you can't have your character mouth off during a fight. The fact that they can deal with physical action and still be able to think of something snarky to say says a lot about a person.

3 Do not allow the character to be verbally vicious unless the scene demands it. There is a big difference between disdain and cruelty. If your character insults someone viciously, ask yourself how that will move the story forward. Will it fuel the plot? Or do you intend the scene to show a major character flaw? If so, show the consequences as early as possible. Your character gets fired, or loses a friend, or someone takes it out on a person they love.

Just as in real life, actions and words have consequences. It's great to show the flaw, but remember to show the result as well.

Pietas inhabits many books in my story universe, including the Bringer of Chaos series, the Antonello Brothers, and Tales of the Chosen. Download a printable PDF list of my books: Booklist