The Council Will Not Believe #ChaosIsComing #scifi

The Council is mighty, but its days are numbered unless they learn to believe.

To celebrate the launch of Bringer of Chaos: the Origin of Pietas I’m sharing 30 Days of Chaos. Each day during April, I’ll post one excerpt from the book, along with a poster of a quote by Pietas. On the final day, members of my Romance Lives Forever Reader Group will receive a full color book containing all the quotes and posters. Unlike my website, the book posters will have only a quote and a beautiful image. Look for a giveaway at the end of this post.

The Council Refuses to Believe 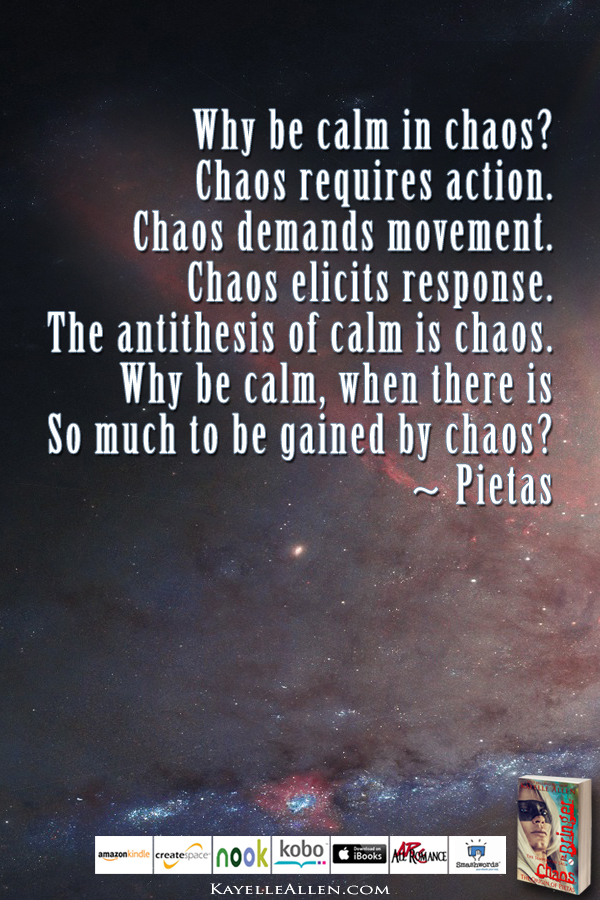 At the appointed time, Pietas entered the elevator with the council, ignoring the warning looks from his father. His mother tugged his father to the rear of the elevator, and cast a hopeful smile at her son. Seeing the two of them together, with his father newly reborn and his mother aged, reflected their differences. He had always been hot-tempered; she, wise.

Pietas turned away, wishing he did not have to disappoint her, but he could not in good conscience carry out the council’s command. Lock his people into a treaty with these oath breakers? Never.

The entire council would be furious with him. As usual.

Dessy arrived as the doors were closing, and slid into place on his right as second-in-command.

On her bosom sat an oval-shaped gold and black brooch, the glass front of which revealed a plait of his hair interwoven in a complex pattern. His sister said nothing, but he felt her empathic outpouring of assent. Yet despite her emotional support, she had voted against him.

Would he never understand this woman? Shoulder to shoulder they faced front.

The closed car meant the sting of emotions in the small space bombarded him from all angles. His skin twitched, and he rubbed his arms as if cold.

A cadre of humans waited in the assigned receiving chamber. Ten humans would be given in exchange for ten members of the Ultra Council, as Mahikos and the council had requested. While the Ultras were on board Enderium Six, the humans would act as hostages. If anything happened to the Ultras, the humans would die lingering deaths.

A crawling-ant sensation on his skin escalated to a sting. These creatures hid some secret he did not yet fathom. Pietas bit the inside of his cheek, fighting the urge to lash out, to rip away the life of these mortals.

As agreed, the council members had come unarmed. Ultras had no need to carry weapons. They were weapons.

“You!” He gestured toward the human who approached. “I want more.”

“I beg your pardon?” The man stopped, and looked up at him. Average height for a human, he was over a foot shorter than Pietas, and clothed in nondescript gray from head to toe. The dark-skinned man gave him a quizzical look. “More what?”

“More hostages. Ten for ten implies you are our equals. You are not. I want thirty. That will not come close to matching the worth of one of our warriors. Since I doubt you have more than thirty brave enough to face our wrath if you fail, that will suffice.”

Grimacing, the man looked over his shoulder. A woman in the group gave an almost imperceptible nod. He turned back. “Very well. We’ll need more time.”

“You have ten minutes.”

“It will take longer than–”

Pietas lifted a hand. “Power up the guns.”

Mahikos came up beside him, and flickers of heat traced over Pietas’s skin. His father’s emotions announced his displeasure, but a council member who interfered with negotiations risked being banned from service.

A hum in the background escalated, and lights on the wall panels switched over to red. “Activated,” replied a robotic voice.

“You can’t do this!” The human emissary stretched out both hands. “There are half a million souls on board. You said you’d come in peace. We can’t–”

“Your repetition bores me. Do you need thirty minutes because you include children among your hostages?”

A cold smile tightened the man’s bland features. “We sent all the civilians and their families off station five days ago, knowing you were coming.”

This underscored what Pietas had said all along. Why would the council not believe this was a trap? They had believed none of his warnings. He would have to get them out of this on his own.

“So you feared me, did you? First intelligent thing you’ve said today. If laying waste to this station will kill human soldiers, so much the better.”

—
Bringer of Chaos: the Origin of Pietas
Immortal. Warrior. Outcasts. Traitors took everything. Except their honor.
Preorder on Amazon http://amzn.to/1R8DAbb (Out May 1, 2016)
Read now in print on CreateSpace http://bit.ly/boc-origin-csp