Oh, gracious, that must be Pietas #ChaosIsComing #scifi

Pietas is the current Chancellor of the Council. His father, Mahikos, has stepped down from that position. They agree on little, and argue about plenty. But the chief source of contention is humanity.

To celebrate the launch of Bringer of Chaos: the Origin of Pietas I’m sharing 30 Days of Chaos. Each day during April, I’ll post one excerpt from the book, along with a poster of a quote by Pietas. On the final day, members of my Romance Lives Forever Reader Group will receive a full color book containing all the quotes and posters. Unlike my website, the book posters will have only a quote and a beautiful image. Look for a giveaway at the end of this post.
—

That Must Be Pietas 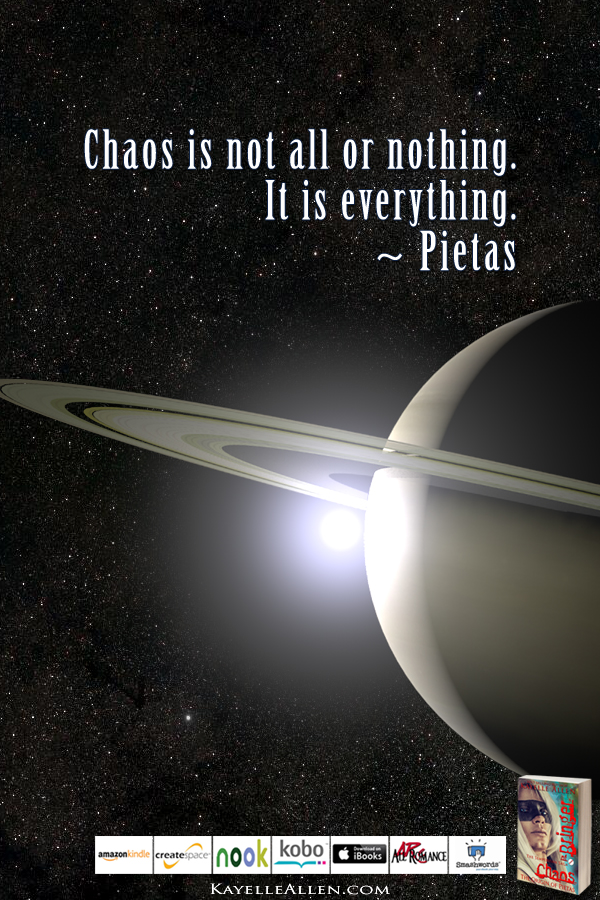 “Son, humans are the reason we exist.”

“How well you preach love.” If only he gave it half as well.

“I’m certain I already am. Just this morning when I knocked on your chamber door, I heard Mother say, ‘Oh gracious. That must be Pietas.'”

Mahikos glowered, but for once, did not argue.

“Such a lovely chat, Father. Do give me an evening alone before I subject myself to the presence of humans.”

His father made a bow, far from genuine in respect, and stalked away. At the door, he paused and turned back. He shook his head as if coming to a decision, opened the door, and left. Quite unlike the man to leave without getting in the last word.

Later, Pietas stood before the wall-sized viewscreen, taking in the change of station lights as the ship began docking.

His father was right about one thing. The almighty council ruled as it wished, and one either obeyed, or it removed you from power. His entire family might be members, but they served at the council’s command. Pietas, as elected leader, made the final vote, but his office could overrule no one.

The council voted in favor of the treaty. Pietas had cast the sole dissenting vote. Equality and balance of power was the cornerstone of Ultra rule. It had worked for centuries, but now they wanted to apply those principles to humans.

“Humans. On the council. Equal to Ultras. Not in my immortal lifetime.”

After he destroyed these peace talks, he’d suspend the council. He’d already united the soldier class as First Conqueror, War Leader of the Ultras. They’d accept his rule when he took command as king. Then, and only then would he be free to accomplish his most vital goal, keeping humanity in chains–where it belonged.
—
Bringer of Chaos: the Origin of Pietas
Immortal. Warrior. Outcasts. Traitors took everything. Except their honor.
Preorder on Amazon http://amzn.to/1R8DAbb (Out May 1, 2016)
Read now in print on CreateSpace http://bit.ly/boc-origin-csp