In this scene from Bringer of Chaos, Pietas is returning from a meeting where he refused to accept the ten hostages offered by a group of humans. He insisted on thirty instead. His parents, both former leaders and still on the council, trail after him.

To celebrate the launch of Bringer of Chaos: the Origin of Pietas I’m sharing 30 Days of Chaos. Each day during April, I’ll post one excerpt from the book, along with a poster of a quote by Pietas. On the final day, members of my Romance Lives Forever Reader Group will receive a full color book containing all the quotes and posters. Unlike my website, the book posters will have only a quote and a beautiful image. Look for a giveaway at the end of this post.
— 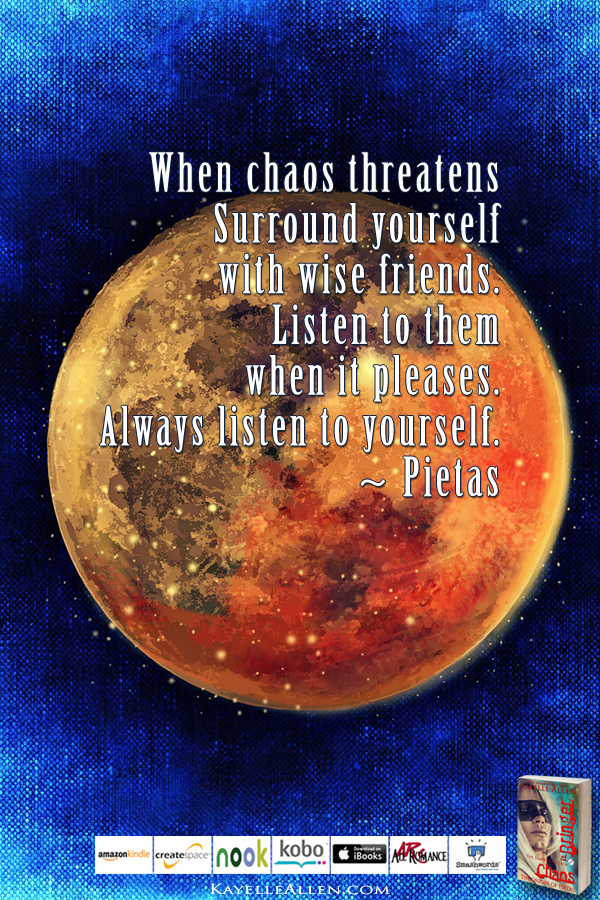 His parents trailed him back toward private quarters. “Pietas,” his mother called. “Wait!”

For her, he stopped, and turned around.

Small compared to most Ultras, and delicate of face, Helia ap Lorectic was as tough as any soldier. Like him and his father, she possessed an eidetic memory, and a fine scientific mind. If anyone was the hope of their people, it was she.

“Pietas, you know this is wrong. We agreed to those terms before we arrived.”

“It is not wrong, Mother, and the terms were made by the previous council head, not by me.” He opened the door to his quarters, and turned back to Helia. “They’ll agree to my terms or they’ll die.”

Mahikos stepped in front of his wife. “You will destroy these talks, you inflexible, intractable narcissist!”

“Why, Father. I’m impressed you know words that big. Thank you.”

The man lurched toward him.

“Stop it!” Helia positioned herself between the two. “Pietas, please. It took–”

“No, Mother. I never negotiate with humans from a position of fear.”

Mahikos jabbed a finger toward him. “You never negotiate at all.”

“Your precious humans have five minutes.” He shut the door in the man’s face.

His father’s shout of anger followed, and then his mother’s calmer tones, soothing. The thud of a fist rattled the door before Mahikos gave way to whatever it was Helia was saying to him.

“Just like old times.” The message board lit up. Furious texts and outraged faces filled the screen. “It seems I made every council member angry at the same time. How efficient of me.”

The device on his wrist let Pietas portal anywhere on the ship, or to the side of whichever member he wanted. He could use it to communicate. He kept his on private mode, always. No one entered his presence or spoke to him unless he wished it.

His empathic senses, however, he left open. Politicians lied as a matter of policy. Emotions did not.

He stroked a fingertip over the bracelet’s smooth black surface, and then gave it one tap. “Security! Keep the guns hot.”
—
Bringer of Chaos: the Origin of Pietas
Immortal. Warrior. Outcasts. Traitors took everything. Except their honor.
Preorder on Amazon http://amzn.to/1R8DAbb (Out May 1, 2016)
Read now in print on CreateSpace http://bit.ly/boc-origin-csp