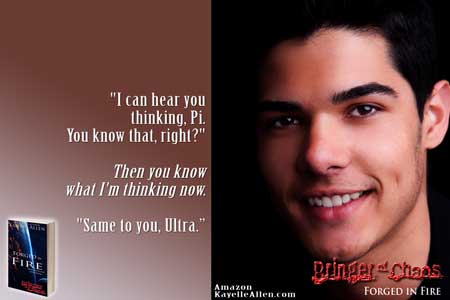 With a close friend, you might actually say, “I can hear you thinking.” In this scene from Bringer of Chaos: Forged in Fire, Pietas and Six have climbed a mountain and are almost at their destination. They’d walked for well over a month to get to this point. The two have relied on one another for survival, despite the fact that Pietas is an immortal Ultra and Six is–or was–human. They should have been mortal enemies, but fate has made them close friends. In fact, for reasons they don’t yet understand, Six has begun literally hearing Pietas’s thoughts.

I can hear you thinking

Last to reach sunlight was Six, the ghost. Not a phantom or aetheric creature, but a member of Ghost Corps. A human who’d died and been resurrected by infusing his body with Ultra blood. Transformed into a quasi-immortal with enough strength to perma-kill Pietas or another immortal. And ironically, the closest friend Pietas had ever had in his entire unceasing, solitary life.

Without slowing his pace, Six skirted around Philippe, trudged up the hill toward Pietas and joined him atop the rocks. He, too, shielded his eyes.

He’d grown lean and ragged over the weeks they’d hiked the planet. Both of them had. No matter how much fish they caught, or what wild fruits they found, there was not enough to gain weight. Like Pietas, Six had no beard, a result of his transformation. His naturally brown skin had grown browner while they tramped in the sun. His dark hair had grown at a human pace and curled over his ears.

Pietas, who could not tan or sunburn, had grown blonder. He’d cut his hair not long after their arrival on Sempervia, but already, it hung halfway down his back. He wore it tied behind him to keep it out of his face.

The nickname irked. He’d asked Six to drop it, to no avail. My name is Pietas. It’s pronounced pee-ah-toss. He might not speak it aloud, but he had to say it. Not Pi. Pee-ah-toss.

“I can hear you thinking. You know that, right?”

Then you know what I’m thinking now.

“Six is an integer. Pi is an irrational number.”

The man shot him a smile. “Like I said.”

Pietas rubbed the tight spot between his eyes.

“Hey! There’s the river.” Six pointed. “What a great vantage point this is. No wonder castles were always built on mountaintops. Talk about your uphill battle, no?”

How like his friend to view the humor in a situation. “True.”

“No.” The man bent, brushed his fingertips across tufts of yellowed grass among the rocks and plucked a handful. He tossed it into the air. “Dry. Possible rain doesn’t reach up here often. I give it two hours, amigo. Longer, depending on the wind.” He sniffed. “Smells different. This’ll be a bad one.”

When the immortal Pietas is marooned on a barren world with no food and few survival tools, he knows it could be worse. He could be alone. But that’s the problem. He’s not.
Half a million of his people sleep in cryostasis, trapped in their pods and it’s up to Pietas to rescue them. Before he can save his people, he must take back command from a ruthless enemy he’s fought for centuries. His brutal, merciless father. Immortals may heal, but a wound of the heart lasts forever…

Amazon and in print. Free on Kindle Unlimited http://amzn.to/2ABIcCI

JOIN US FOR BOOKHOOKS
Book Hooks is a weekly meme hosted by Marketing for Romance Writers as part of the MFRW Authors Blog. It’s a chance each week for you the reader to discover current WIP or previously published book by possibly new-to-you authors.

8 thoughts on “Friends can hear you thinking #MFRWhooks #SciFi #SpaceOpera”