From the book The Last Vhalgenn by Kayelle Allen.

For several months, I was part of an author’s group that practiced weekly writing skills. Some of our best work was created in “flash sessions” where we limited ourselves to 100 words. No more, no less. [pq]Good flash fiction takes time, skill, and patient editing. But it teaches you to write. [/pq] I saved mine, and look at them now and then. I thought you might like a peek as well.

Jon took a breather. The other guy wasn’t firing. Jon imagined him doing what he was doing. Sitting back, Jon listened for more gunfire. More sounds of war. What if neither of them fired again? What if they sat here, neither of them moving, and didn’t fight? Was that what peace was all about? Not shooting at one another? Wasn’t peace more than not having to fight for the right to exist, to simply be? Wasn’t that what Jon was out here to do? Provide his people freedom from tyranny? Shooting began again. He scrambled to his knees and fired.

He blew out the breath he’d been holding and took another one, hands shaking.

Been waiting for this. Been wanting it, so, so damn bad. He licked his lips. I should’ve started so much earlier, taken more time, gotten all of it ready. Oh! Yes. Yes… Here it comes!

The last little bit of ketchup landed on his fries.

He spread his thighs wider and slid down a little. “There. Can you get it in now?”
“No. Not yet.” He hooched over to the right, grunting a bit as he pushed harder. “Hold still.”
“Hurry up, baby.”
“I’m trying!” He shifted his shoulders, angled one foot against the ground for better leverage. “It’s almost in the hole. Just a little…”
“Do it harder! I can’t keep this up.”
“Hold on, baby. Hold on.” He wiped sweat from his brow. The heat rose. Fingertips slick with lubricant, he rubbed the opening. With a click, the car’s axle slid into place.

So much for avoiding embarrassing myself. She’s wearing red. Again.
I needed her to wear one more red dress to haunt my memories. This one was sleeveless, baring perfectly formed arms, strong and feminine. Strapless too, revealing skin the color of mahogany cream.

A man doesn’t stand a chance with her in that dress. Long, slinky, shiny, scarlet. Oh, God. It looks– wet. Perfect. Slick and smooth.

Her mouth is the same red, her lips plump, like she’s just been kissed. Like she ran her tongue across them. Like she wants me. Is she wet anywhere else?
Damn, damn, damn.

He rubbed his eyes, trying to focus in the dimness. Dawn’s grey light filtered through curtains billowing at the open window. A soft shriek of autumn wind whistled outside, and a gust of wind tossed the curtains apart, letting in a chill that pebbled his skin. Tossing back the silken sheets, he padded across the cold wooden floor and reached up to shut the window.

The sound of the wind silenced, leaving an utter calm. “Ahh.” Shivering, he hurried back to bed.

“You cold?” His lover reached out one powerful arm and dragged him closer, up against his radiant heat.

“If you can’t be with the one you love, love the one you’re with.” The words to the old Crosby, Stills, Nash and Young song kept running through this head as he walked up the sidewalk. Friends assured him he’d get over her loss by starting over. But though his feet carried him forward, his heart wanted to run back.

Nothing could substitute for her. She’d been his first. Had taught him so much. Sure, she’d had her flaws, but they’d been together so many years… How could ever just buy another motorcycle now that his baby had been totaled?

“Almost like blueberry.” He licked. “With a little licorice.”

“Is not! Stop that.” His lover tried to sit up, but was pushed back against the bed.

“You’ve had enough.” He managed to sit up this time. “Give me the popsicle.”

This flash was an exercise with a group of author friends, and was done as a joke on one of the other regulars. He was the only one who didn’t know we were going to make up crazy words and use them as often as possible. This was the explanation given for the day, which did not go toward the word count:

“Today we’re talking about clarityness and succinctation. This is what flashion is all about. The ability to shortspress yourself. Tell us in 100 words or less what could have taken multinormously more words to do. The topic is speed. Anything to do with being fast, quick, or a blend of the two — fuick. Use 100 words or less.” Here’s the one I posted:

Trash frillinormous adverbs and unconnect from ginormous nounwords. Present the smoothliest cream of meaning possible — a banana smoothie of wordage. Blendification of understanding is the goal.

(Like “Flashionation” for this flash we were supposed to over-write a description for a simple thing.)

The meatiness of it thrilled her from her tiny, itty bitty little feet to her abundantly flowing cascade of rich streaming hair. She flounced said locks, running a manicured hand through the generous quantity of golden curls that bounced around her shoulders. Her fingertips, painted white by the French manicure process, which was not truly paint but a type of pencil painstakingly etched underneath her long, oval shaped nails, tapped the edge of the meat delicately.

Too much pressure on such a tender hunk might cause everything to slip, spreading juices over the white tablecloth as she cut the steak.

“Guys! Check out this gun. It shoots around corners.” Jase waited for the hysterical laughter to die down so he could continue. “Look, I’m not faking this. It really works.”

Guffaws filled the barracks. His sergeant slapped him on the back. “Rookie, you got taken.”

“Okay. Stand in front of it then.” Jase flipped out the supports for the gun, set it down and turned its nose 90 degrees to the left, then sighted along the special scope.

Snickering, elbowing each other, whispering, his bullies clustered in front of the weapon.

Jase pulled the trigger. When it worked, nobody laughed.

“Hey, Mom. It’s me. I tried that recipe you sent me. It sucked.”
“No, not the roast. Those cookies.”
“No. Not Aunt Matilda’s. The cookies with mashed potatoes.”
“Yes you did so give me a cookie recipe with mashed potatoes in it! You said to use leftovers.”
“Oh, now you remember. Well, it sucked. I threw mine out.”
“Cause nobody’d eat ’em!”
“I didn’t do anything wrong. Why do you always jump to conclusions about my cooking?”
“Substituted one thing. I didn’t have mashed potatoes. Not everybody’s got cooked taters laying around.”
“Three cans of Pringles.”
“What’s so damn funny?” 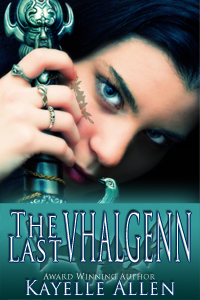 Evanescence was belting out another tune as I pulled in and parked. I sat there, motor running, singing along, mumbling parts I didn’t know. Jailhouse singer, that’s me. Behind a few bars and can’t find the key, but I love to sing.

A car door across and down opened, and out popped the prettiest thing I’d ever saw. Big brown eyes, sweet mouth, not a day over twenty. Damn cock reared up like a stallion at the thought of that tight ass inside tighter jeans. Those lusty eyes met mine and he smiled. Just like that, I fell in love.
—
Thanks for popping in today. :) How about a taste of something much better to read? This is a giveaway for everyone, an illustrated eBook called Behind the Scenes with The Last Vhalgenn. This free eBook is an inside look at the characters and setting in the story. When you click the link, this will either offer you a download, or open in a new window, depending on your settings. To read it, you need Adobe Reader, available free. http://is.gd/vhalgenn_peek

Like Loading...
Posted in Humorous Stories | Tagged Fun Stuff to Do, Kayelle Allen, The Last Vhalgenn, Tips and Tools, Writing |

It’s the Romantic Times Convention in New Orleans this week. It’s going to be fun. But what if you’re not going? Maybe you can’t get time off, or you live too far away. Or maybe it’s not in the budget. Some folks don’t like live crowds. I hear you. I’m not going either. So I’m joining The Romance Studio’s fourth annual Staying Home Party. They’re giving away an Amazon gift ecard (electronic gift card only, value $100) to one lucky reader and a lot of other prizes too!

The event will be held exclusively at The Romance Studio PARTY SITE. Registration isn’t required if you’re a reader who wants to comment or enter any of the giveaways.

When is it? What time will it be?

Okay so HOW do I enter for the Amazon gift ecard?

The Romance Studio authors will be posting during the event period at our PARTY SITE about their latest books and other entertaining topics. Comment on any of the posts at any time during the event (should be at least acceptable/polite comments because comments in poor taste may result in exclusion from the event), and fill out the gift card entry form that will appear at the party, and you will be entered into the drawing for the Amazon gift ecard.

How do I enter for the other prizes?

For other prizes donated by TRS and all participating authors, there will be easy to use giveaway forms at the PARTY SITE.

1) It must be legal to participate where you are.
2) You must be at least 18 years old to participate. Content on the party site may be mature in nature.
3) Non-reviewing staff members from TRS are not eligible to participate.
4) By entering, you agree that TRS and its participating authors are not responsible for items lost in the mail.
5) By entering, you understand that there will be romance books and/or ebooks making up or included in the prizes. These will be of varying genre and heat level and by entering, you agree that TRS and its members and affiliates are not responsible for material the individual prefers and/or finds suitable or doesn’t.
6) No substitution of any prize, for cash or other products, allowed.

What authors will be participating in the event?

What are you waiting for? I already gave you an invitation. ^_^ See you on the site! http://trsparties.com/

Grab a giveaway here before you go. This is for everyone — no entry needed! It’s an illustrated eBook called Behind the Scenes with The Last Vhalgenn. This free eBook is an inside look at the characters and setting in the story. When you click the link, this will either offer you a download, or open in a new window, depending on your settings. To read it, you need Adobe Reader, available free.
http://is.gd/vhalgenn_peek
The Last Vhalgenn is on sale now — only $0.99!
Duty to king and country has shaped Raik’s life since birth, but to protect them, she must perform a ritual that betrays all she holds sacred. http://is.gd/SciFiFantasy_Vhalgenn