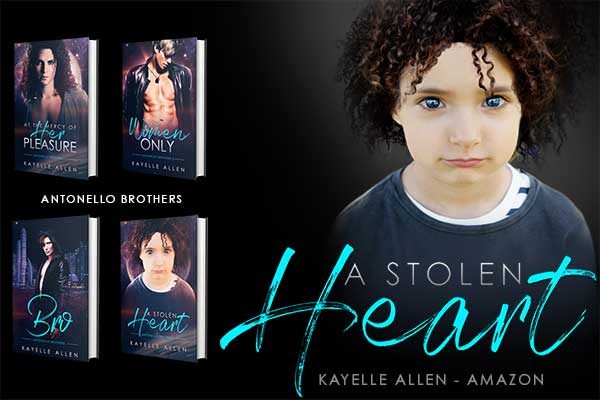 Luc learns the truth about Kaydn

In this scene, Luc has gone three days without sleep already, and it's late at night, but he'd promised to talk with his Deshai (apprentice), Kaydn. After an apology for mouthing off at Luc, Kaydn tells him why he'd been so angry at finding out Luc had fostered a young child.

"All right, Kaydn. What is it you think I should know about the Guild?"

"No way to sugarcoat this. The Guild targets gifted children, kidnaps them, and master thieves pay to adopt them as Deshai."

Luc considered how well he knew Kaydn. Impulsive? His image should be in the dictionary next to the word, but he did not dwell in a fantasy world. "You think our Guild does this."

"I know they do. They steal toddlers from their families, tell them their parents are dead, and then they change the kid's last name, bring them in and palm them off as orphans. Master thieves pay to take them on as Deshai. The Guild pockets the money. And then because they're Guild-trained, they keep a portion of their income and on top of that, make them pay dues."

This dovetailed right into what Luc had uncovered about the girl he'd traced for Pietas. "Such an accusation runs counter to everything the Guild stands for. We've protected homeless children for generations. Given them homes and taught them careers."

"I didn't want buy it either, until I saw it myself."

"Prove it, Kaydn." What had Luc told the Grand Master that morning? "You can't accuse the Guild of such a heinous crime without proof."

"I know." Kaydn scrubbed both hands over his face. "I can."

"Orella--" Kaydn's voice broke, and he paused. "Orella Vettov is my sister. She found me a month ago. My parents died, never knowing what happened to me."

Luc drew back. "What are you saying?"

"I'm saying--" His voice wavered. "My real last name is Vettov. I'm one of the kids the Guild kidnapped."