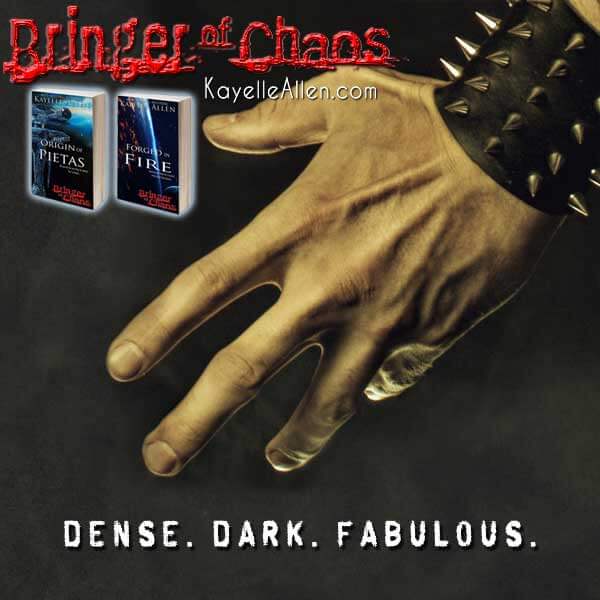 Hero Wanted: must be dark and dangerous. Insight into writing an antihero #Pietas #MFRWhooks #MFRWauthor

When I started writing Bringer of Chaos, it was supposed to be a book about Pietas, king of the immortal race called the Sempervians. About a third of the way in, I realized I needed more than one volume for my dark and dangerous hero. I changed the name to Bringer of Chaos: the Origin of Pietas. Book two was Bringer of Chaos: Forged in Fire, which came out in December last year. Currently, I’m working on Bringer of Chaos: Watch Your Six. I’ve written about 10k words so far. Pietas — who is a villain in books set in the far future — is descending into darkness.

Pietas is not a true villain. He’s a flawed hero and an antihero. He was a complex enigma when I began the first book. I know him now. My dark and dangeous hero suffers in the Chaos series. I’m not kind to my characters. I’m sure he would gladly throttle me if he could, but his story is richer and more layered because of his trials.

In Watch Your Six, he’s decided that his mortal friend, Six, must not be allowed to die. Pietas believes he can impart his own immortality to this “ghost” — a human warrior who has been resurrected with immortal blood. He refuses to part with this man he has come to trust, depend upon, and even love. He has never had a friend who treats him like he’s just another man. Though he doesn’t know how to deal with that at times, he loves their camaraderie. Anytime he interacts with Six, there is a thread of humor. Sometimes, it’s almost a rope!

In the part below, from my work in progress (subject to final editing), Pietas and Six have had a serious falling out over the imparted immortality. Six does not want it — Pietas refuses to accept that decision. Their disagreement has led to blows that both regret and Pietas, always the gentleman, has apologized.

“You’re only sorry I haven’t given in yet, but apology accepted.” Six offered his hand.

The mortal clasped his forearm. “Warrior to warrior, Pi.”

“Aye, my friend.” He could not say more without his voice breaking. How much longer would he have with this man at his side? This brother who reached him in ways no friend ever had? How would he ever survive on this world without Six? Pietas gave himself a moment, squeezed his friend’s arm. “Always. More than brothers. I should not have hit you.”

“Actually, you missed me completely.”

Deadpan, the man stood stock still, but then burst into a smile. “I just did.” He nudged Pietas with a shoulder. “Doesn’t mean this is over, Ultra.”

“I never thought it was.” He released his friend. “Ghost, I am sorry.”

“The minute you said the words, I knew you didn’t mean them.”

“Yet you punched me anyway.” He rubbed the tender spot on his chest. “That was a lucky hit.”

“Yeah, lucky. Here and on Enderium Six.” Six tossed up a dangerous hunting knife and caught it. “Where you surrendered.”

“What? ‘Where you surrendered?’ You prefer ‘Where you were defeated’ instead?”

He narrowed his eyes in warning. “You caught me off guard. Both times.”

“The mighty Pietas, War Leader of the Ultras, Chancellor of the High Council. Caught off guard by a dead human.” He held up two fingers. “Twice. Wow.”

“Ghost!” Pietas tightened his fists. “Did you not hear me say I want you to live forever? Don’t make me kill you.”

To know when this book is released, join the Romance Lives Forever Reader Group. You can download four free books right away. You can unsubscribe at any time.

JOIN US FOR BOOKHOOKS
Book Hooks is a weekly meme hosted by Marketing for Romance Writers as part of the MFRW Authors Blog. It’s a chance each week for you the reader to discover a current WIP or previously published books by new-to-you authors.

5 thoughts on “Hero Wanted: must be dark and dangerous. Insight into writing an antihero #Pietas #MFRWhooks #MFRWauthor”