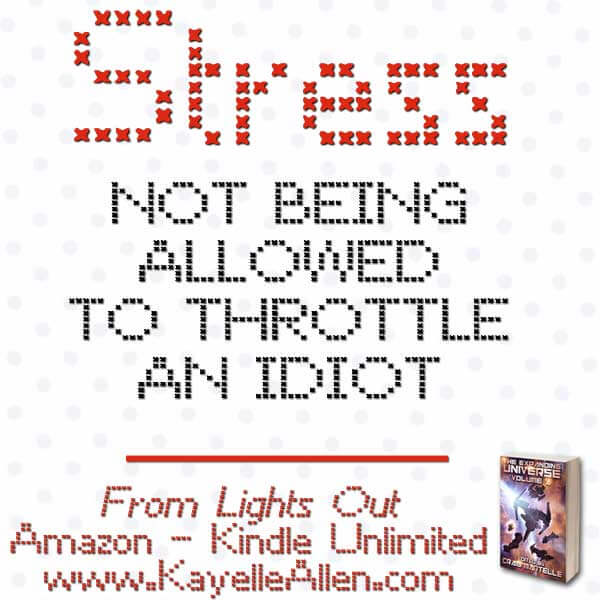 Define Stress: Not being allowed to throttle an idiot #Humor #MFRWhooks #SciFi 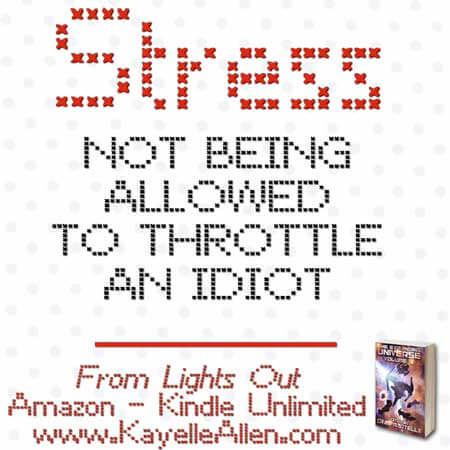 WordWeb says you can define stress as difficulty that causes worry or emotional tension. Such as having a boss who's a jerk, or a coworker who's lazy or... well, you get the idea.

In today's post, a snippet from Lights Out, the hero is having a bit of stress...

In this scene, Tornahdo has been chewed out for something that in the regular army would have gotten him a commendation. Even a medal. But Ghost Corps is not regular. Not one bit. He sits down to have a drink and calm himself down, but one thought leads to another.

Tornahdo's family believed him missing in action. He couldn't go out in public. Ghosts got call signs, not new identities. He'd earned his by the way he fought, which, according to those who'd been resurrected with him, was a tornado.

"No, he's Hispanic-Terran," one had said. "He'd pronounce it different. We'll call him Tornahdo."

To which he'd offered a sweeping bow. "Sí. Gracias."

If taken prisoner, the enemy wouldn't find out who his family was, or who other ghosts were. Like any cover story, the more you lived it, accepted and believed it, the more solid it became. He was Tornahdo. Every minute. Every day. Right now, he fought the urge to kick into full tornahdo rage and slam through a certain officer's quarters. On his desk, his former commander had a framed quote, hand-stitched by his wife.

"Stress: the body's reaction to not being allowed to throttle an idiot."

How many times had the man shouted that Tornahdo was stressing him out? More than he cared to admit.

But today, he knew exactly what that quote meant.

6 thoughts on “Define Stress: Not being allowed to throttle an idiot #Humor #MFRWhooks #SciFi”