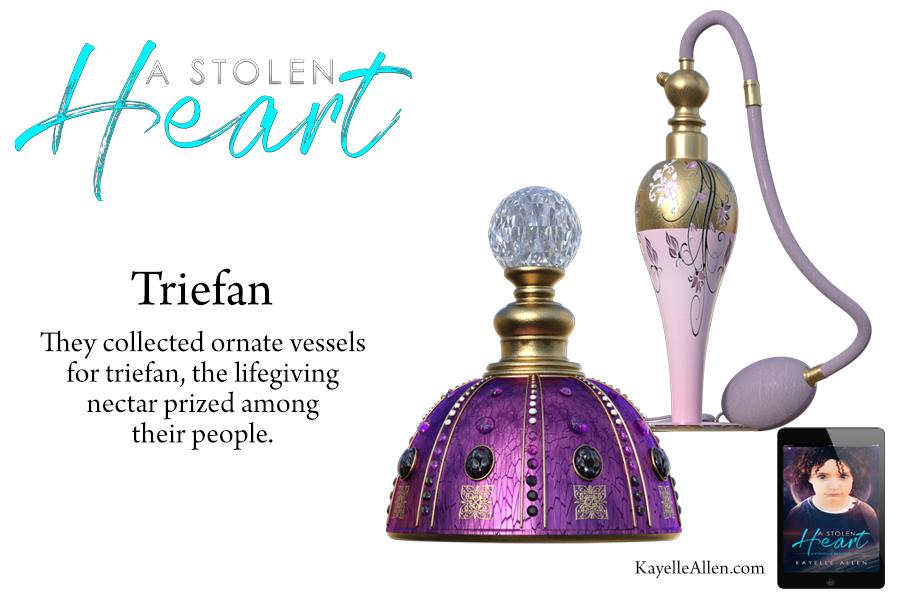 In this scene, Luc is invited to share a sip of triefan, a nectar from a flower that originated on the planet Sempervia. It does nothing for humans but it increases the metabolism of an immortal and gives them nearly instantaneous healing.

Carrying a tray, the android lingered in the entry until Pietas beckoned to him. "Your triefan, my lord." Uurah presented a tray with a mini-decanter of iridescent teal, capped by a silver top engraved with ornate flowers. A pair of thimble-sized glasses matched it; their tiny stems carved with curling silver petals.

Immortals vied with one another to collect such vessels for triefan, the lifegiving nectar prized among their people. The more elaborate and expensive, the better.

Luc kept his in a brown vial fitted with a medicine dropper. "I've never seen this decanter. Is it new?"

"It's beautiful. Isn't it?" Pietas picked up the container. "Sadly, the treacherous human who gifted it is no longer with us." While the android held the tray, Pietas poured, holding the cap in place as if serving high tea.

"I'm surprised you accepted a gift from someone you considered treacherous."

"Accepted prior to discovering the treachery." The king handed the single-sip serving to Luc. "That's one traitor who won't betray anyone again." Pietas delivered those words without heat.

They stung Luc anyway. "Yet you kept the gift."

Pietas turned the decanter back and forth, eyeing it. "Well, it is rather pretty. The giver insisted I should have it because it matched my eyes." He held the ornate item next to his face. "What do you think?"

"What makes you think it was a he?" Pietas twisted toward the cat. "It appears we have a new king."

The king's panther had taken the opportunity to claim the warm seat Pietas had vacated. The cat gazed at them from the throne.

"Tiklaus sits on that throne the way you do, one paw hanging over the edge."

"Indeed. Like a king." Pietas lifted his glass toward the cat. "Here's to delicious traitors and panther justice."

The cat licked its chops.

Fighting a tangled mix of fear and apprehension, Luc touched the lip of his glass against his king's and then downed the few drops inside.

Like himself, Pietas made a face and shuddered. Triefan might heal immortals instantly and give their already rampant metabolisms a boost, but the raw nectar tasted like spoiled lemon overpowered by week-old asparagus.

One eye closed, Pietas grimaced. "Ugh. Uurah, no more of that. Flavor it next time."

"Do you have a preference, my lord?"

"Yes." He plunked the tiny glass back on the tray. "Literally anything."

Be sure to check out the other authors in this blog hop, linked below.