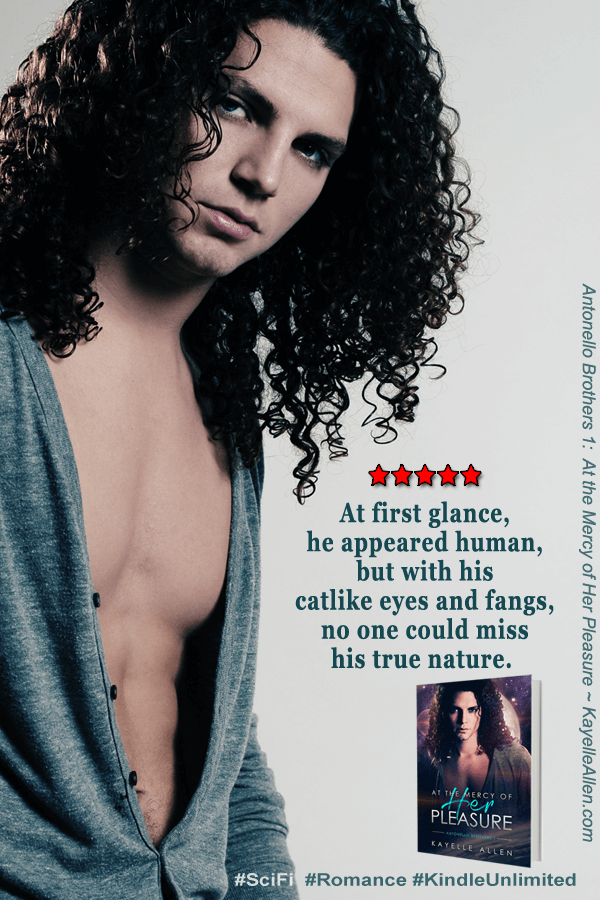 At the Mercy of Her Pleasure #SciFi #Romance #MFRWhooks 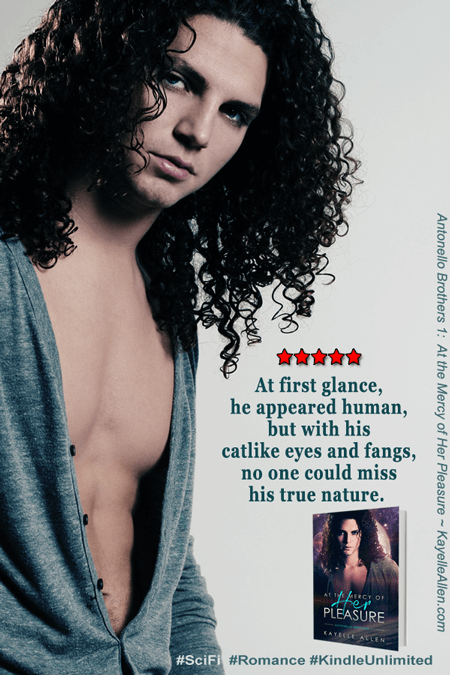 At the Mercy of Her Pleasure...

The title of this book, At the Mercy of Her Pleasure, makes it sound super sexy. I mean, look at this guy, right? The name comes from his heroine, NarrAy, an enhanced human whose pheromones allow her to control others. Can he resist her? Does he even want to? Sadly, he must or he will not be able to free his brother, who’s in the worst possible situation…

If you love a great romance with unforseeable twists, but don’t really care for explicit content, this book is for you. It’s adult in nature, but is rated PG13.

In this scene, Senth must meet someone at a hotel above a nightclub, and when you look as young as he does, getting in isn't that easy...
---

As Senth approached The Ghost, the club's beefy Kin bouncer put out a hand. "Hold up, kid. You--" She motioned toward Khyff -- "Wait over there. You..." She motioned Senth aside. "You got ID?"

Senth opened his cloak, revealing the lining with its unmistakable Thieves' Guild insignia, a skeleton key inside a slashed circle. He gave his Sen'dai's hand sign.

"Ffffftt!" The bouncer made an apologetic shrug. "Sorry. Why didn't you say you were the Man's right up front?"

"His shouldn't have to." Senth brushed a hand down the front of the cloak. "And I'm no kid."

"Sorry, sir." She opened the door for both of them and bowed.

Once inside, Khyff held out one palm, and Senth slid his down it, hooked his fingers as Khyff did, and with hands clasped, gave one downward shake.

"C'mon, Bro." Khyff led the way past the darkened foyer.

"Stay close," Khyff shouted over the pulsating music, standing next to Senth. He headed for the rear and left no chance to argue. They skirted around the crammed dance area. Senth liberated a few loose credit stubs clipped to belts and stuffed them into the pockets of his cloak.

He tried not to stare at the slakes along the wall, but their clothing and attitude declared their availability. A pair of male and female slakes bent over a low railing, their pants around their ankles. Androgs handled their bodies like merchandise.

"Try being the one hanging over the railing." Khyff jerked his head. "Come on."

Females ruled on the Kin planet Felidae, and the majority who visited The Ghost had more than one male in their company. A single Kin female at the bar turned and looked Senth over from head to foot. Tall and slender, she wore brown leather the same color as her hair. She slid her tongue across her upper teeth, back and forth between her fangs, and wiggled her cute feline nose. Then she twitched her pointed ears toward Senth. A tap on his arm drew Senth's attention.

"Stay away from her, Sen." Khyff glared at the Kin. "She'll take you to bed and then eat you for breakfast. That's not a figure of speech. HalfKin who leave with her aren't seen again. She's working this floor for someone. Watch this." Khyff slid a hand down his body, giving the Kin a slow smile.

The female crooked a finger at Khyff and smiled back.

When Khyff rubbed his fingers and thumb together in a sign for money, she turned away. "Yeah, I thought so."

His brother snorted. "You couldn't pay me enough to screw a Kin."

Sweet Science Fiction Romance with a Kick.
A fast-paced sci fi romance with an adorable, fun-loving hero who's half-human and half-cat and a by-the-book army captain heroine. Hired to steal back a prototype taken by the imperial armada, Senth retrieves it, but his brother is kidnapped to force Senth to surrender the device. Now he has to rescue his brother, outsmart the armada, and keep the item out of imperial hands. All doable, except for one small problem. He must do it in the company of NarrAy, a genetically altered woman whose pheromones could enhance the mission or crumble it into dust with a single siren kiss.

At the Mercy of Her Pleasure by Kayelle Allen
https://amzn.to/1f7FQ2h