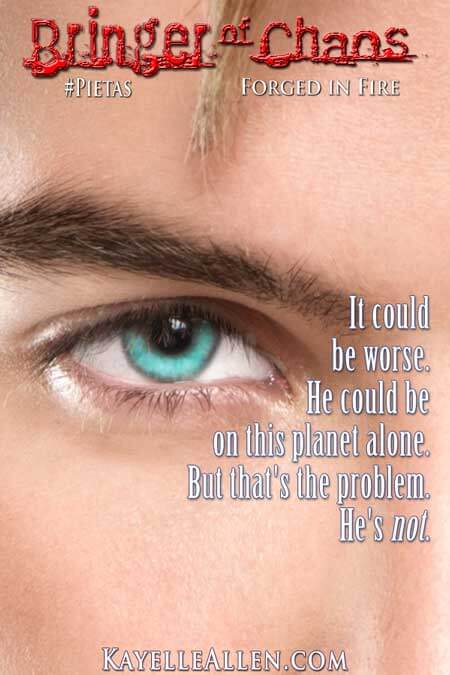 Blink twice if you hear me, ghost #MFRWhooks #MFRWauthor #SciFi

In this scene, Six, member of the Ghost Corps (a human resurrected with Ultra blood), has been taken hostage by Mahikos, Pietas’s father. Pietas and Joss have just found him.

“Are you looking for this?” The unmistakable voice of his father came to Pietas before the man’s faint outline revealed itself in the dark.

Mahikos had captured Six and pressed a knife blade to the ghost’s throat. At the point where the blade dug into him, blood oozed.

The blank passivity on his friend’s face revealed what Pietas had feared. Six had been compelled into submission by the psychic gifts Mahikos wielded. He would stand there and let the man kill him.

“That’s far enough, Son.” Mahikos dragged Six backward. “Unless you want your own hands covered in this human’s blood.”

Pietas ground his teeth. For this, his father would forfeit his life. “I will end you, old man.”

“Will you?” Mahikos dug the knife edge into Six’s neck. “You dared bring this abomination into our camp after it threatened your mother–the woman I love–and you want to end me? This thing is going to die by my hands!”

Time slowed to a crawl.

Pietas drew every vestige of Compulsion he had and threaded Chaos along its invisible bands. Mahikos was immune to both, but aligned, they might soften his will.

That word rattled around his head, a stone bouncing off the sides of a bottomless metal pit.

Pietas had practiced compulsion, sending command after command to Six. The man was immune.

Six, blink twice if you hear me.

How he treasured this man! Good job, ghost. You stalled him. If you’re hurt, blink once.

Excellent. I should never have left you. I’m sorry. On my mark, drop and get out of the way. Joss, go right. Distract him.

I serve. Her mindvoice packed the simple Ultra vow with raw emotion.

When the immortal Pietas is marooned on a barren world with no food and few survival tools, he knows it could be worse. He could be alone. But that’s the problem. He’s not.
Half a million of his people sleep in cryostasis, trapped in their pods and it’s up to Pietas to rescue them. Before he can save his people, he must take back command from a ruthless enemy he’s fought for centuries. His brutal, merciless father. Immortals may heal, but a wound of the heart lasts forever…
Amazon and in print. Free on Kindle Unlimited http://amzn.to/2ABIcCI

10 thoughts on “Blink twice if you hear me, ghost #MFRWhooks #MFRWauthor #SciFi”