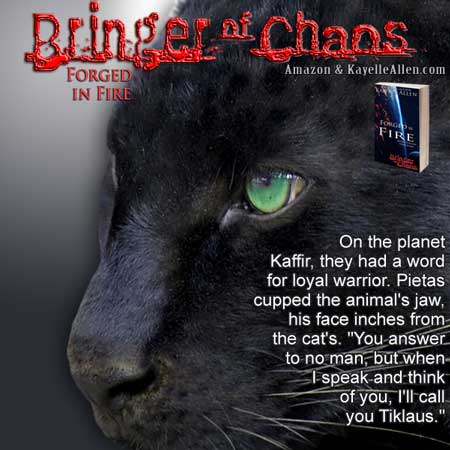 In this scene, Pietas is getting to know Tiklaus, a massive black panther.
The animal has appointed itself guardian over the immortal king.
Who knew panthers liked belly rubs?

Flipping onto its back, belly exposed, Tiklaus huffed twice.

"You want a belly rub." Laughing, he rubbed with one hand and stroked with the other.

Tiklaus lolled on its back, legs spread wide, the position trusting and submissive. The big cat sneezed and then rocked to its feet, shaking its head. Claws retracted, the panther batted at him, knocked Pietas onto his back and then flipped itself down beside him. Tiklaus wrapped its front legs around his arm and gnawed at it in gentle play while the hind feet kicked him without injury. Claws flashed, but did no harm.

Now I know how a chew toy feels. He blew out a breath.

When the panther draped itself over his chest, Pietas struggled to slide out from under but could not get up. The animal weighed less than he did, but with no visible effort, it kept Pietas from rising.

The panther ignored him.

Pietas tried a signal that worked with sparring partners and asked for release by double-tapping the panther's side.

The cat stood at once and stepped over him. It shook from nose to tail, then sat and groomed itself.

He stood and brushed himself off. Standing beside Tiklaus, who reached him mid-thigh, Pietas took pride in knowing this sweet, playful cat was also the snarling ball of animal rage that had nailed his father to the ground. Mahikos had not seen it coming.

He should have let the cat eat him when he had the chance.

Pietas ensured no one was on the path in either direction before he knelt and scratched the cat's ears. "Who's a good kitty?"

The animal sneaked in a lick of his hand and face and flopped down on its back.

"My Tiklaus, that's who. Tiklaus is a good kitty." He rubbed the smooth belly. "Yes, you are! Such a good, big kitty. You're my kitty, aren't you? Good, good kitty."

The panther accepted the attention, one paw twitching. After a moment, it stood and shook itself. A purring sound rumbled from its chest. It sat, licked one paw and added a lick of Pietas's face as well.

He chuckled. "Thank you for the bath." He hugged the panther's neck. "You have as soft a heart as I do but you don't show it either. Pact, my friend. I won't tell if you won't." He kissed Tiklaus on the nose.

The panther bumped its head against Pietas, then bounded to a tree and up it.