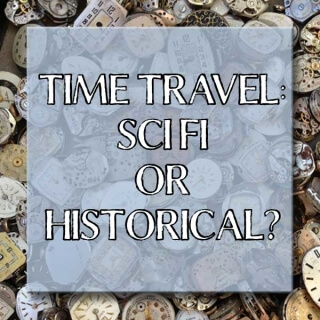 In this two-part discussion on time travel, I’ll share a fascinating discussion in my reader group. I love science fiction and fantasy, space opera, whether film, TV, book, or magazine. Likewise, time travel has always fascinated me. But is it sci fi or historical? I decided to ask my readers.

QUESTION: Is a time travel in which characters travel to the future a Sci Fi? Would one in which they traveled to the past be historical?

I offered a $10 gift certificate to Amazon, Barnes and Noble, or Amazon (winner’s choice) for the best answer. One of my readers is author Dariel Raye, who in turn asked some of her readers. I got responses from both groups. I’ll share some here and the winning response next week.

Anything that removes you from your present time, whether it be future or past, in my opinion is SyFy.

Good point! I suppose that is quite true. :)

I think they both would be Sci Fi as the ability to time travel does not exist at this time.

ooh very clever answer! So true. Do you think it’s something we’ll ever have?

At this point in time, I don’t think it is possible (who knows what the future holds) but it would sure be nice to be able to go back in time to experience history (there is so much I would like to experience) without changing it (be like a fly on the wall). One can dream. I’m not sure how going forward would work — would we be going into our own future or the future in general is the question. Would we be able to change anything in the future if it was bad? Future time travel generates a lot of ethical questions. What do you think?

I know current science says it’s impossible. But 500 years ago, smartphones would have been considered witchcraft. Who knows? But wow I would like to be that fly on the wall myself. Long as someone didn’t swat me! LOL

I’d love to go into the past. Always been fascinated by Alexander the Great. I think a time travel story about a doctor going back in time to save Alexander’s life might be good. Except maybe it turns out that his being there is actually what killed him… Which means he had already gone back before he decided to take the trip. No matter how you look at these stories, you get mental vertigo!

I don’t think a book where the character gets to the past through time travel would be a historical novel because the character’s perspecitive and attitudes would still be from current times even after arriving in the past.

Nice insight! You make great points. It’s still contemporary to the time traveler in a sense. And since it’s not the main plot (necessarily) it could be just a plot device.

I hadn’t considered that traveling to the past would still keep the person with a contemporary attitude. That’s excellent! Have you read any good time travel stories lately?

This one is awesome. It’s actually part of a series but I read them out of order lol, I bought the first one but haven’t gotten into it yet but they can be read stand-alone.

Wow that is one different idea. A time traveling Amazing Race. I can see that could be totally misused and abused. I put that on my wishlist. Thank you. :)

I did see what Wikipedia said (the first paragraph) which is very similar to what I learned. The last sentence sums up the total.

Speculative fiction is an umbrella genre encompassing narrative fiction with supernatural or futuristic elements. This includes, but not limited to, the genres science fiction, fantasy, superhero fiction, science fantasy, horror, utopian and dystopian fiction, supernatural fiction, as well as their combinations. Anything using speculative science– something that hasn’t been invented– is also Science fiction. (Science- not invented- speculative- fiction)

Good answer! So by these standards, you think time travel is always scifi?

I can believe that. I have a sci fi that has a major plot of archaeology. Trailing Kaiwulf is about a character who’s trying to discover the history and meaning of these huge “gates” they are finding on multiple planets. Think mini size St Louis Arches side by side. So while the story is very much sci fi it is also very much archaeology. I guess you could have historical sci fi as well.

Kind of spins your head around, doesn’t it?

All if it does. I go with science fiction when anything has hard science and fantasy if it is based on ‘magic’. If it can be explained with speculative science—SciFi. If it relies on anything of the paranormal—fantasy. Of course, that all spreads over into other branches. Mind boggling possibilities with all of it. :D

I would love to read it when you have it completed.

Oh, that book is done. Want it in Kindle, epub or pdf? I’ll send you a copy.

Kindle and thank you!

Here you go. This is the story concept:

I plan more books in the TRAIL series. Trace, Rescue and Identification League is a group of bounty hunters, missing person investigators, and agents who recover the unrecoverable.

Characters from this book will cross over to another book’s sequel. The “gates” they are investigating were created by the immortal king in my current Bringer of Chaos series. I write in a huge universe and it’s all tied together by this king, either as his loyal followers, his enemies, or someone being manipulated by one of the two. The one thing I haven’t done yet is a time travel. I’d like to try it one of these days.

Thank you! I will definitely read and review. Time travel has a wide variety of possibilities. Research whatever time period is going to be time consuming but it will definitely be worth it. I do read a lot of historical fiction and if something seems off—I research. (I can’t stand glaring errors! LOL) Of course, I like research so that is a plus or negative depending on what side of the book you’re on.
The bottom line that I have found over time – As long as you don’t make glaring mistakes–it is your world, your mind, and your creation. Have fun!

Tune in for part two next week…

What do you think?

All these comments spurred wonderful discussion and thoughts. I’m more fired up than ever and eager to write a time travel. Someday! Not sure when.

What is your favorite time travel book, film, or TV show? Share it in the comments.

Would you like to be part of next month’s discussion? To participate, join the reader group. Kayelle’s Reader Group