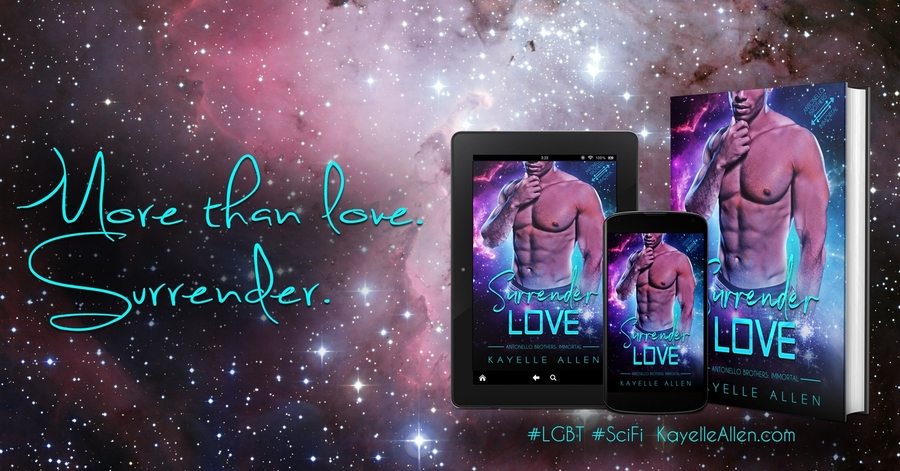 He should eat. But he headed for the bar #Excerpt Surrender Love by Kayelle Allen #SciFi #GayRomance #MFRWhooks 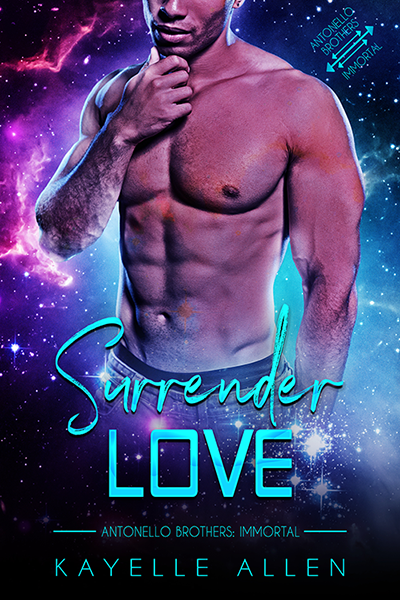 A little feral, a little innocent, all male, Izzorah Ceeow flees a world that denies him basic rights. Forced into a human society blind to his needs, the young Kin male lives for his music. When a freak accident throws him into the care of Luc Saint-Cyr, the most powerful human in the empire, the attention Izzorah receives is beyond anything he'd ever dreamed. But is the attraction he feels toward his rescuer gratitude, lust, or a deeper, abiding call to yield all that he is?

The prestige of Luc's power, wealth, and influence direct an empire scattered across the stars. His word shapes the foundations of business and his financial prowess is of mythic proportions. Yet beneath the myths beats the heart of a man who craves what he has never given and is certain he will always be denied -- steadfast, faithful love.

This will take more than love. It needs full out surrender...

In this scene from the beginning of the book, Luc is arriving home from work, where "friends" have spent the day telling him how sorry they are he recently broke up with his lover. Aggravated beyond words, he runs into McDoth, his android major-domo, a stickler for rules who's been appointed watchdog by Luc's king, who is worried about him.
---

Outside the entrance to his home, Luc stopped, fingertips against his brow. He lifted his head, straightened his shoulders, and opened the door. The scent of polished wood and fresh flowers greeted him. A hint of baking bread beckoned and his stomach growled in answer. He should eat.

Instead, he headed straight for the bar.

As usual, McDoth lay in wait. The attentive butler / major-domo was as predictable as his immaculate tuxedo uniform. With his graying hair and wrinkles, most people mistook him for human. A kindly, aging grandfather who still worked for a living. Like his driver, James, the android was firepower mixed with grit. More tyrannical than a nagging wife and more tenacious than a steel weed. No matter how far Luc went, McDoth would follow, protecting him, serving him, while refusing to let him forget a single detail, rule, or obligation.

Were it his choice, Luc would fire McDoth tonight. In truth, the android deserved a medal. His tolerance and patience knew no bounds. Their relationship had lasted centuries and would for a thousand centuries more.

If their king had his way, Luc would never be rid of the human-shaped ball and chain. Which was the point of a referee. They kept you honest. At least...as much as they could.

"Welcome home, sir." The refined accent programmed into McDoth for this lifetime fit the look of a staid butler.

The android dropped a few ice cubes into a tumbler and set it on the bar. "For your whiskey, sir. Do try to limit yourself to one this evening."

And there it was. The daily lecture. You drink too much. You eat too little. You work too late. You never stay home.

Luc reached past him and picked up a fresh bottle of his best whiskey, a Kelthian brand from a distillery he'd bought a few years prior.

"Allow me to take your overcoat." The butler reached for it.

He turned to give his servant access, changing the bottle from one hand to the other as he slipped off the garment.

"It's quite late, sir. You must be tired." McDoth folded the coat over his arm. "How was your day?"

"Same as yesterday. Busy, but I accomplished nothing." He darted toward the stairs.

He halted, gripping the banister so hard he expected to see marks when he let go. The promise of solitude in his chambers above beckoned, but there would be no ignoring the interrogation. He checked an impatient sigh and turned back. "What?"

McDoth came to even sharper attention, his habitual passivity giving way to concern. "It is good to have you home, sir. We see little of you. Shall I bring you dinner? No records show you ate today, unless the earlier visit to your club included dining on someone else's account."

"I'm capable of asking for food if I'm hungry and I don't need a reminder you keep electronic tabs on me. I have no illusions about being your true employer. I'm not hungry. I'm fine. Stop fussing over me."

"As you wish, sir." The butler brought him the tumbler. "Remember, just one."

Luc lifted the bottle of whiskey and wagged it right in the android's face. "I will."

~ 3 ways to know when a new book is available~
1) Sign up for my newsletter. You'll get a starter set and other exclusive perks. You can unsubscribe at any time.
2) Follow my Amazon Author Page and get one alert from Amazon when a new story is available.
3) Sign up for AuthorAlarms and the app will send you one email when I release a book. You can add and remove authors on this app.

These books are in the same universe as Surrender Love, and feature Luc Saint-Cyr.

10 thoughts on “He should eat. But he headed for the bar #Excerpt Surrender Love by Kayelle Allen #SciFi #GayRomance #MFRWhooks”