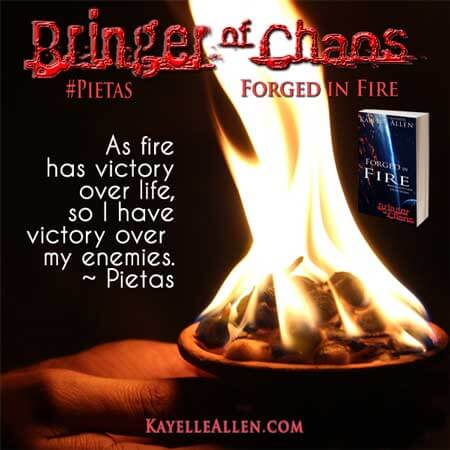 The blood of my enemies #SciFi #Pietas #MFRWhooks

In this scene from Bringer of Chaos: the Origin of Pietas, Pietas undergoes a ritual used on the planet Kaffir is summon spirits. “The blood of my enemies trickles into the pool of time,” he proclaims.

He shed his silk robe and let it fall at his feet. Nude, his platinum hair streaming down his back and chest, he lifted his hands, palms up as if praying. On the planet Kaffir, warriors used this ritual to summon spirits. He used it to affirm his own superior strength and prowess.

He passed a hand through the flame, and hissed at the searing heat, relishing the pain. He cupped his hand over the flame’s source, and held it until the fire went out. The burns on his palm cooled and as he watched, the skin healed. Of all the elements, fire alone had power to linger on an Ultra’s skin. He welcomed it as a symbol of victory.

Pietas thrust both hands forward, clutched his fists, and yanked them back. “I own the wind. I prevail over the breath of my enemies.”

“Water submits to my presence the way enemies submit to my will.” He cupped water in his hands, lifted it, and let it pour down his arms. “The blood of my enemies trickles into the pool of time, is absorbed, and forgotten.”

He pushed wet fingers through his hair, and released it. “My mind is clear. I do not waver.”

He submersed and rose, head thrown back, face lifted to the sparkle of stars above. “My body submits to my will. No pain defeats me. No fear touches me.”

He swept his hands down his chest to his loins and the tops of his thighs. “My will is absolute.”

Satisfied with his looks, Pietas pulled on a pair of loose white lounging pants. With a deep, cleansing breath, he opened the door. Damp, shirtless, barefoot, he padded into the adjacent room.

Immortal Council member Pietas ap Lorectic, warrior leader of the Ultra race, wants nothing to do with faithless, lying humans.

The inferior race may have created his people, but they used them as slaves, not powerful beings with rights of their own. Upon discovering humans captured and tortured his people, Pietas declares humans deserve no offering of peace. They deserve conquest and elimination.

When the Ultra High Council agrees to peace talks, Pietas grudgingly complies. Arriving at the space station Enderium Six, he discovers his psychic gifts are diminished and suspects a trap. A deadly fight between Pietas and altered-humans of the Ghost Corps ensues. Cornered, out of options and with his beloved mother’s life at stake, Pietas surrenders.

Now a captive of the people he loathes, Pietas is left for dead on the barren planet, Sempervia. Six, a member of the Ghost Corps abandoned with him, offers food and water. Is this altered human worthy of friendship? Or is the offer of shelter a ploy to gain his own protection?

Either way, Pietas must do the one thing he detests. Trust a human…

Book Hooks is a weekly meme hosted by Marketing for Romance Writers as part of the MFRW Authors Blog. It’s a chance each week for you the reader to discover current works in progress or published books by possibly new-to-you authors.

10 thoughts on “The blood of my enemies #SciFi #Pietas #MFRWhooks”