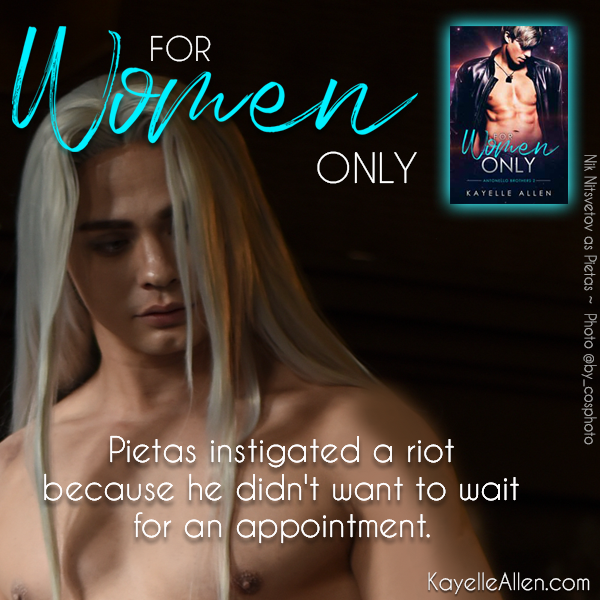 In this scene from For Women Only,
Empress Rheyn Destoiya is planning
a pleasant evening when her twin brother,
Pietas, instigates a riot among her
Praetorian Guard and takes her assistant
hostage.

After the Empress settles everyone down and is alone with her brother, she lets Pietas know she is not the least bit pleased. There's a reason a reviewer said this book had "complex, scary and slightly disturbing bad guy sidekicks." This scene takes place in her palace office.

For Women Only Excerpt

"Why the drama, Pietas?"

"Your assistant wouldn't let me see you without an appointment."

"You insufferable..." She palmed the weapon fastened beneath her desk, then withdrew it and aimed at his head.

Pietas laughed, but he raised his hands. "I should've known you'd be armed."

With her other hand, she picked up his gun and aimed it at him. "Ambidextrous, remember?"

He started to put his hands down and she thumbed his weapon to full. His hands went back up. "Fine, Dessy. But I had to see you, and he wouldn't let me in. You know how I hate waiting."

"For that, you made my favorite your hostage and instigated a riot among my Praetorian?"

She sighed and clicked the safety into place on both weapons. "What do you want?"

"I haven't seen you in twenty years, and that's all you have to say to me?"

"It's been eleven years, and according to the rules of Peril, I shouldn't have seen you for at least ten more. And you had no right to interfere with anyone I claim as mine. Don't you ever touch Alitus again. If you do, I'll kill you in every way you hate." She tapped the desk. "And I know them all, my dear brother. Is that clear?"

He twisted his mouth. "Fine. I won't touch your pet."

"Or allow anyone within your control or influence to do so. So help me, Pietas, promise me or I'll--"

"Yes, yes. I promise. Don't be tedious. I get the point." He dropped his huge frame into a wingback chair and hung one leg over an arm of it. "Besides, you're impossibly nasty when anyone touches your pets."

She snorted and slid his gun toward him. "Fine. Now tell me what you want."

At the Mercy - Senth's story

For Women Only - Khyff's story