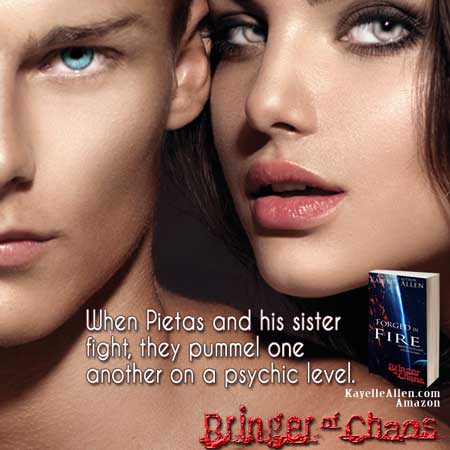 In this scene from Bringer of Chaos: Forged in Fire, Pietas has a psychic fight with his sister, Dessy. Having seen Pietas performing a ritual for their people with a human, she adjusts the “mask” he’s wearing. (He’d pretended to put it on, but due to the urgency of the situation, there’s nothing on his face.) When Pietas takes affront, twins Armand and Philippe try to take her side.

Dessy slid one fingertip across an area below one of his eyes. “There.” She dusted off her hands. “That’s better.”

“Since you didn’t have a real partner for your ritual, I fixed your mask.” She shot him a humorless, sneering smile. “You missed a spot.”

Ire flooded Pietas. He gripped Dessy’s wrist and yanked her to him.

The shock on her face gave way to indignation. “Let go!” She jerked her arm but he held her fast. She shoved him.

He didn’t budge, refusing to let her win.

She bombarded him with her empathic senses. The psychic melee of anger and rage stung worse than an ice storm, but pain had never stopped him. “I’m warning you, Pietas. Let go of me!”

“Or what?” He shot back his own and added a trickle of Wilt, a demand for surrender. “You’ll tell Daddy?”

Her inborn Ultra gift of Compulsion pushed at his mind, willing Pietas to release her. His sister had mastered the psychic ability as a toddler. He’d been four before he grasped the concept. Seven before he’d mastered it.

But he’d been born immune.

Another wave of outrage pummeled him, but it did no more good than the first.

“Pietas!” Dessy stamped her foot. “Let go or so help me–” She threw her other hand up, fingers spread.

The world tilted, disorienting him, no longer than it took to blink.

“Did you throw Chaos at me?” He patted his chest. “They call me Bringer of Chaos because it’s my strongest gift.” He yanked her up hard and brought his face close to hers. “Shall I show you?”

“I will not play games with you, Sister.” He loosened his grip, allowing her freedom. Even as furious as she’d made him, he refused to hurt her. “Did you think I wouldn’t know what you were doing? Telling me I ‘missed a spot’ was a play for power.”

“Power?” Dessy’s eyes flashed, their deep-winter-ice darkening to sooty gray. She settled herself and lifted her chin, regarding him with all the cold calculation of a paid temptress seeking whatever customer held the most cash. “I’m your sister. How can you say that to me?”

“How? Because two thousand years of attitude. Because you haven’t changed one bit. You’re more manipulative than ever.”

She rubbed her wrist, softening her expression. Tears welled. She folded her hands as if in prayer and placed them along her cheek. “I didn’t mean to do anything wrong. Don’t be angry with me.”

“Save it. That hasn’t worked on me since I was a boy.”

“Oh, Pietas.” She sniffed. “I’m sorry. Didn’t you realize I was playing? I’ve missed you. I wanted to be part of your ritual, that’s all.” Her voice broke on the last.

Armand and Philippe whipped toward her faster than trained puppies.

Pietas threw the compulsion to stop.

They halted, their wills frozen by the conflicting psychic demands.

Dessy reverted to her temptress self, glaring at him with a dare. “You’re the one who hasn’t changed. You countermand everything. You’re the same pain in the–”

“Dessy!” Pietas bent down to her. “You’ve been the queen of fake tears since you were two and discovered they got you out of punishment. They might have worked on our father but they will not work on me. Save it.”

“You let that human do the ritual with you! There’s nothing worth less than a human.” She sent a snarling glance Six’s way. “Except a dead one.”

8 thoughts on “A psychic fight is chaos #SciFi #SpaceOpera #MFRWhooks”