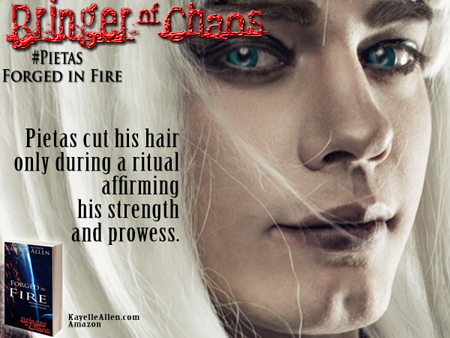 How to pretend a ritual (with a human) @nitsvetov #SciFi

When I created the Ritual of Strength for Pietas, I acted out each part to be sure I described it accurately. My pretend ritual inspired the scene below. Later, my son helped me storyboard it using a 3D program.

The multi-step ritual will be performed as a cosplay by Nik Nitsvetov, the model I have used for Pietas from the beginning. The event will take place the first weekend in September. To see the live stream, follow Nik on Instagram. I'll be announcing it in my reader groups as well. I'll provide more links for Nik at the end of this post.

Before Pietas goes to war, he performs a solemn ritual. While not religious in nature, it holds great personal meaning for him. When the immortal king is caught in a storm and unable to perform it, his friend comes to the rescue. That is, if the king will unbend his stiff-necked attitude and let himself "pretend."

Pietas's long hair, full of static electricity from the wind and storm, settled over his shoulders and adhered to his neck. He could not lift his arms to gather it himself but he did not want the others to see he needed help nor did he want Six fretting over it.

The man blamed himself for the injury. Yes, Six had bound Pietas. It had been Six's duty to do so. In truth, those who had placed Pietas inside the pod and refused to release him were to blame, but no matter how often he reminded Six of that, the ghost refused to relinquish his guilt.

Six dug into his pockets. "I think I have another cloth strip." They had torn several from a ragged shirt. Six wore the biggest piece around his neck. He set down his pack and opened it.

"Six," Pietas hissed. He did not turn his head, but looked toward the others. "Leave it!"

The ghost glanced up at him, then the immortals, waiting ahead. "You want the women messing with your hair? Is that it?"

He closed his eyes, counting to ten. To a hundred would not erase this embarrassment. "No." When he beheld Six, the man had the discourtesy to smirk. "Don't look at me in that tone of voice."

The man chuckled. "We should have cut your hair before we set out." He rummaged through his kit, which held all Six owned when he'd been abandoned on this world. Little more than survival gear.

"I never cut it except in ritual."

"I know." Six withdrew a boning knife used for it.

Before every battle, Pietas performed the solemn rite to affirm superior strength and prowess. The ghost had been the first human to see it carried out, albeit the first half from a distance while hiding.

Six stood. "Maybe you could perform it now."

"How like you to see the easy solution. But there are a few elements missing. No fire. No water. No mask." He gestured toward the oncoming storm. "No time."

"Haven't you ever heard of pretending?"

"One cannot 'pretend' a ritual."

"What a boring childhood you must've had. Why not?"

Pietas opened his mouth to answer. Shut it again.

Six lifted one eyebrow. "Do you want to go into that dark hole and meet up with your people without performing it?"

"Rain's coming." Six jerked a thumb toward the forest. "Like I said, you have to go in there or you won't reunite with your people. Are you going to stand out here making excuses, or do this?"

"Ghost, this ritual is important. It deserves respect."

"Blah, blah, blah. That storm is bearing down on us." A few drops of rain splattered them both. "See? Or maybe you'd rather have your sister help you with your hair every morning."

"Fine!" With a resigned sigh, Pietas capitulated. "How do you propose we 'pretend' my ritual?"