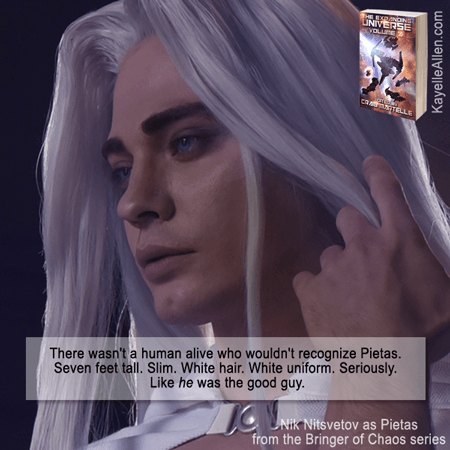 Pietas dominates as the main character in Bringer of Chaos. In a major fight scene early in the book, he faces eight human warriors. In Lights Out, the prequel, the same scene is shown from the viewpoint of a human. Pietas has multiple psychic gifts, among them, the ability to move at what humans perceive as super speed.

In his mind, his opponents are numbers. Here are the two fight scenes side by side for comparison.

Pietas activated his ability called zip. The pseudo speed meant he could move at a regular pace, but humans perceived him as a blur. They could not focus on him long enough to get close. To him, everyone moved in slow motion.

He flipped onto his feet, braced both hands on his pod, and kicked Three and Four square in the chest.

He pushed off the pod, and the momentum carried him straight into the arms of Five and Six. They stumbled backward, tumbling Seven and Eight onto the floor.

A blur showed where the Ultra had been. Pietas halted, braced both hands on a pod and kicked a pair of ghosts behind him.

Stumbling out of the way, Tornahdo went down in a tumble, taking out the ghost beside him, who knocked down the last two.

Writing an action scene with multiple fighters challenged me as a writer. I learned there are three things every writer must do when creating a multiple character fight scene. They are: plan, plan and then plan. When I wrote Lights Out, Bringer of Chaos had already been published. That meant I could not deviate from what had already taken place. The actions and activity were canon to the story. To remain faithful to it, get all the same details and tell it in a fresh way, I wrote Lights Out with the other book open. The fighters had to be attacked in the same order. That meant I had to show what the hero in Lights Out was doing while Pietas was busy attacking Tornahdo's comrades.

This fight took place in a room with lifepods, so there were big obstacles. But that meant there were also spots one person could spring over to attack. So a big consideration for planning is to know exactly what is the room. This is called blocking. Knowing where each person is in the room and what they are doing will help you determine who will do what -- and who can do what. After all, you can't have the hero bashing the villain in the head if the villain hasn't reached the hero's part of the room.

Draw the layout of the room on graph paper, considering these questions:
What furniture or fixtures are present?
Where is the entry? Are there windows? Other doors? Trapdoors? Other exits?
How much manuevering room does the hero have?
If you have more than one fighter, place them in the room as well.
Where does each person go during the fight?
Which character is doing what?
Who is carrying weapons?
Can they use them in the space allowed?
Are there dangers in using weapons in an enclosed area? What are they?
Do the characters have special powers?
Are those powers triggered by something or someone in the room?
What are the consequences if they are?

The list could be endless. At some point, it's best to put down the pencil and graph paper, go to the computer (or wherever you write) and get down to business. You can't edit a blank page. Plan the scene, write the scene, tweak the scene, love the scene. Warning: it's fun planning, but if you're a writer, you must also write. Never let the fun of planning keep you from the work of writing.

What are your suggestions for writing a fight scene? Please share them in the comments.