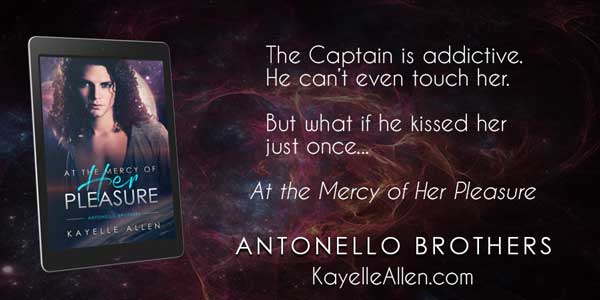 He had to work with a what!? #SciFi #Romance #Excerpt #MFRWhooks

In this scene from At the Mercy of Her Pleasure, Senth gets a chance to free his brother from a cruel master, but the price is steep...

"If this job succeeds, I guarantee your brother will be freed in a week."

Senth tried not to show his glee, but a smile pasted itself across his face anyway.

The Harbinger shook his head in a way that said, What am I to do with you?

"What do I have to do for Khyff's freedom?"

"Khyffen was right. The job we're meeting about tonight is risky. I don't usually give you a choice, but this time I'm going to because of the job's importance. In return for your brother's freedom, I want a few promises."

"I'll do whatever it takes."

The Harbinger's mouth lifted at one side. "Never admit that to anyone again."

"Senthys, you understand why I've kept you on Shackle?"

While Khyff's master had addicted Khyff to Thrust, which put his sex drive into overload, Shackle did the opposite to Senth. Since puberty, he'd never known life without it.

"Good." The Harbinger tapped a knuckle against his mouth, frowning at him. "You know what they'd do to you if you lost control again, don't you? Where they'd take you this time?"

"Keep that in mind over the next week. After five days without Shackle, you'll start withdrawal. Your heart will pound. Your head will feel like it's splitting apart. You'd be as high and strung out as Khyff is on weekends. There's a possibility of stroke if you quit cold. It's dangerous. You must taper off the drug. Do you understand?"

"This job should take four days, so it's important to return as soon as it's over."

"I'll dose you before you leave to ensure you have the full five-day effect."

"The reason I've told you all this is because you'll be working side by side with a Better."

Senth opened his mouth, shut it again, and then mouthed, Better?

"Listen to me, my young Deshai. Despite the romantic nonsense you've heard about Betters being extraordinary lovers, their kisses can poison you. If her saliva mixes with yours, she can control your mind. The touch of her hands will drive you insane. There are ancient myths about sirens, women who used their voices to lure men and then slay them. Betters aren't mythical. They're real. If she subjects you to her passion, you'll be at the mercy of her pleasure forever."

Senth swallowed against the tight feeling in his throat and nodded to show he understood.

"This woman is dangerous. Under other circumstances, I wouldn't let any of my people work with her kind, but in this case... I have my reasons. I trust you to obey me. As long as you return in fewer than five days, losing control won't even be an option. Shackle will protect you from her. Besides, if you come back to me no longer a virgin, I will know. The deal for Khyffen's freedom will be off."

"How would you know I wasn't a virgin?" Senth bit his lips the moment the words escaped, shocked at himself for even asking the question.

His Sen'dai lowered his eyelids and angled his head toward Senth like a bird of prey sighting its next meal. "Is that going to be a problem?"

Senth reached a foot back, feeling for the next lower step. "No, sir."

"You know what happens when you displease me."

"No, you wouldn't." The Man leaned in until the dark, predatory eyes filled Senth's vision.

When Senth stumbled on the stairs, Saint-Cyr grabbed his arm, steadying him. Senth raised a hand to his brow.

"Senthys? Are you all right?"

"Good." He made a hand sign--a fist with thumb down and then up--which put Senth on guard. "It's time to meet your Better partner."

5 thoughts on “He had to work with a what!? #SciFi #Romance #Excerpt #MFRWhooks”