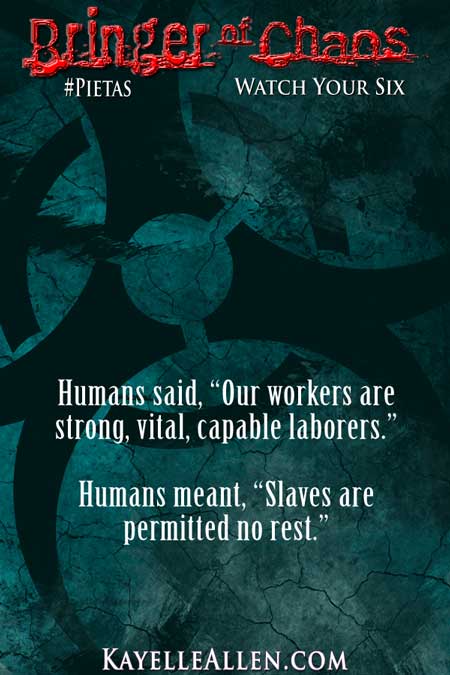 What Humans Say — What Humans Mean about Immortals #SpaceOpera #MFRWhooks

I’m writing Watch Your Six, book three in the Bringer of Chaos series. The others are the Origin of Pietas and Forged in Fire. When you have a huge story that unfolds in sections, it’s helpful to give readers a place to start. That’s usually the job of a prologue. Sometimes, it’s a foreword or another intro of some kind.

I’m considering a bit of the story’s history by listing what humans say about the immortals they created, and compare it to what humans mean.

Immortal. King. Exile. All are what humans say about Pietas. None show the depth of the man known by his peers as the Bringer of Chaos. This series is military science fiction with elements of humor, a small touch of romance, a ginormous black panther “kitty”, a telepathic weapons designer, one used-to-be-human, and the most dysfunctional family since forever.

The Bringer of Chaos series focuses on Pietas and his friendship with the human, Six. In books set in different series in the far future, Pietas is king, and he terrifies everyone. I wanted to understand why his people were so steadfastly loyal to him despite that, so I started this series to find out.

If you want a good read, check out the Romance Lives Forever Reader Group. You get four free books right away and you’ll be first to know when the new book about Pietas is released.

JOIN US FOR BOOKHOOKS
Book Hooks is a weekly meme hosted by Marketing for Romance Writers as part of the MFRW Authors Blog. It’s a chance each week for you the reader to discover current works in progress or previously published books by possibly new-to-you authors. Thank you for stopping by. Please say hello or leave a note in the comments.