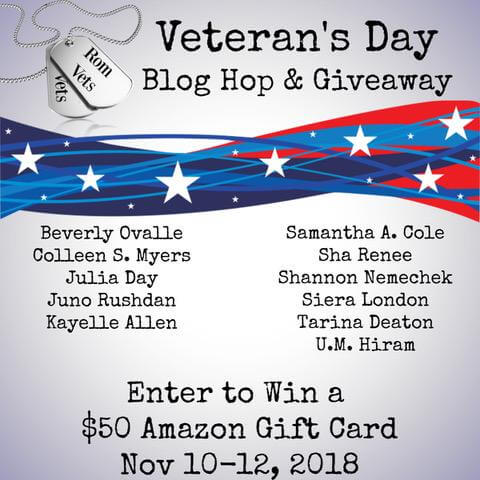 Welcome to the Romance Veterans hop! All the authors in this hop write romance and are themselves veterans. We’re excited to have you!

PLUS, join my reader group today and you will get four bonus books plus be in the running to win an additional $20 GiftCard from Amazon, Barnes and Noble or Starbucks from me. Winner’s choice.

Here’s a quick excerpt from At the Mercy of Her Pleasure, my sweet science fiction romance, book one of the Antonello Brothers series.

In this scene from At the Mercy of Her Pleasure by Kayelle Allen, Captain NarrAy Jorlan has just met professional thief Senth Antonello for the first time. She’s taking it slow, sizing him up for the job at hand. Usually, men are distracted by her pheromones, but on this occasion, she finds herself on the distracted side.
—

NarrAy crossed her legs, exposing a good portion of her skin under the short dress. If she’d been sitting opposite Senth, the length might have been welcome. But his father lounged in that chair and Senth sat beside her on the couch. Her position put her a little closer to him.

“Empress Destoiya murdered my parents,” NarrAy continued her story, “as surely as if she’d been the one who shot them in the back. They were scientists working on secret technology. When rumors got o 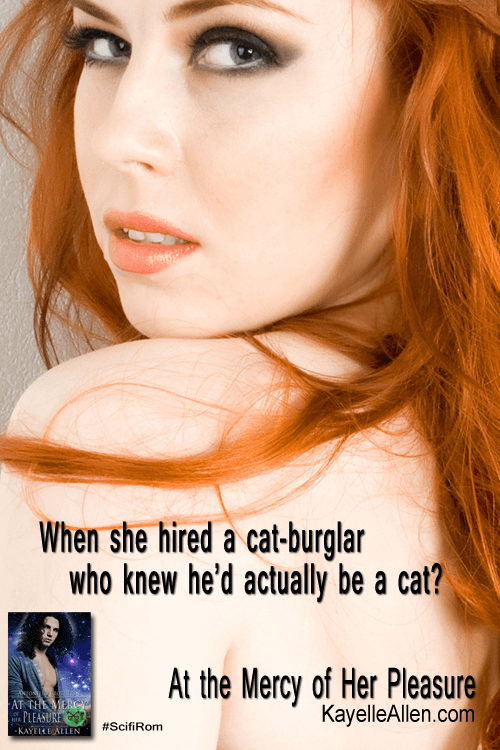 She met Senth’s penetrating gaze and held it. She heard rather than saw Encie enter the room and take up a place near the door. Broxus moved to stand beside her. NarrAy couldn’t take her gaze off Senth. How did I ever see him as a boy?

He had a man’s hands, well-groomed nails and sinewy forearms that revealed power and strength. His biceps bulged. Angular jaw, a firm mouth with lips made for kissing. A hot flutter rose within her and she tamped it down at once, refusing to let her pheromones get the upper hand.

Senth watched her, gaze narrowed, head tilted. He gave a sniff and then eased into a smile. His proximity heightened her desire. He smelled clean, fresh and ruggedly male. A tingle signaled the imminent letdown of her pheromones and she clenched her hands into fists, fighting to calm the spike of lust flickering through her like a torch about to combust.

Senth’s faint smile revealed nothing, but he lifted his head, sniffing the air. Kin could smell emotion and desire. Could HalfKin?

He asked me something. Pay attention to business and not your body. She sat up straighter. “I’m sorry. Would you repeat that, please?”

“What I said was no one hires a level-nineteen thief, transports him to another world to break into a government building and then wants him to steal back a locket with sentimental value. Especially one in the custody of the Conqueror. What’s it really worth?”

“It’s a priceless heirloom.” She set a hand against her bosom.

Senth didn’t follow her hand’s movement. Instead he tilted his head as he leaned back against the couch. “I’m more skilled at this job than you are beautiful, NarrAy and that’s saying something. Tell me the truth.”

Her cheeks warmed. When had she ever blushed over such an offhand compliment?

Remember:  To enter the hop, like this post and comment below. You’ll be eligible to win a $50 GiftCard as a gift from all of us. PLUS, join one of my reader groups today and you will get four bonus books plus be in the running to win an additional $20 GiftCard from Amazon, Barnes and Noble or Starbucks from me. Winner’s choice.