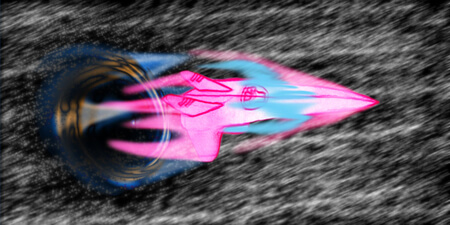 Qallag is a major crossroads. Seven different planets in the Tarthian Empire lie one jump away.

Without drugs, human, Tyran, and Chiasmii pilots often suffer extreme jumpsickness when "shooting the flames", a reference to the "flaming hole" left by a ship's jump engines. The Kin do not suffer jumpsickness. Stars appear blurred during the transition from hyperspace to realspace.

Below, one of the Droid Discovery ships seems to punch a hole in space during a stopover near the Qallag system. 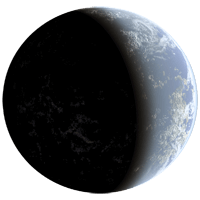 While in hyperspace, no stars are visible. Theories surrounding this phenomenon include reasonable explanations, and some as far fetched as jump ships being vehicles for time travel.

Qallag was colonized in 4649 tradestandard. The only other planet conquered that year by Empress Destoiya was Badledeerin, site of the famous "Last Ground War" in the empire. Qallag's citizens refused to take part in the assault.

Their protests against the devastating war were passive but effective and helped end the war early. Peaceful disruption of business by sitting or lying across entryways was called Qallaging, and was later simply referred to as lagging.