Triple Suns? What SPF is that? #scifi #science

Imagine you live on a world with triple suns. Each morning you see a binary pair and a single star, and your world orbits the three of them. That means triple sunlight. Sound like scifi? No one believed such a set up until Hubble found HD131399.

Imagine life on a world where triple suns rule the solar system. For one thing, during part of the year, as the single sun sets, a binary pair rises. Your day, no matter how many hours long, or what shift you worked, shines a bright sun in the sky.

During other parts of the year, feel a bit deprived of sun? And how much SPF (sun protection factor) does a world with triple suns need? SPF 1000 anyone?

If you had seasonal affective disorder, the sun-days make for awesome sun-filled days of bliss! But the rest of the year, not so great. Training for a trip there means spending time at the North Pole — or at least close. My husband was raised in Anchorage AK, so long summer days are no stranger to him.

According to the HubbleSite news, a team of astronomers led by the University of Arizona has directly imaged with the SPHERE instrument on ESO’s Very Large Telescope the first planet ever found in a wide orbit inside a triple-star system. The orbit of such a planet had been expected to be unstable, probably resulting in the planet being quickly ejected from the system. But somehow this one survives. 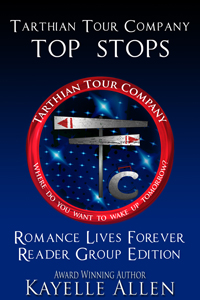 Creating a believable world means research. Articles like this provide a good look at alien planets, and give me ideas for worlds to create. A world with triple suns exists outside the Tarthian Empire, in the Colonies of Man. Tour the major worlds in the Empire with the free book Tarthian Tour Company Top Stops.

In Top Stops, you’ll discover which planet the Terraformers Circle of Fellowship created first. You’ll discover which planets harbor mysterious ruins known as the “Gates of Life.” Do the ruins point to visitation by aliens, or settlement by common ancestors? The powerful Thieves’ Guild rules on at least one world. Visit Sanity IV — a planet torn apart, harvested to build new worlds. All roads lead to Tarth, the Empire’s capitol and shining star… plus much more.

Whether you love seeing the background of how science fiction worlds are built, or just enjoy a fun read set on different planets, Tarthian Tour Company Top Stops is for you.This book is available exclusively to members of the Romance Lives Forever Reader Group. Members have access to pages of my website not available to the public. Get your free copy here: https://kayelleallen.com/bro