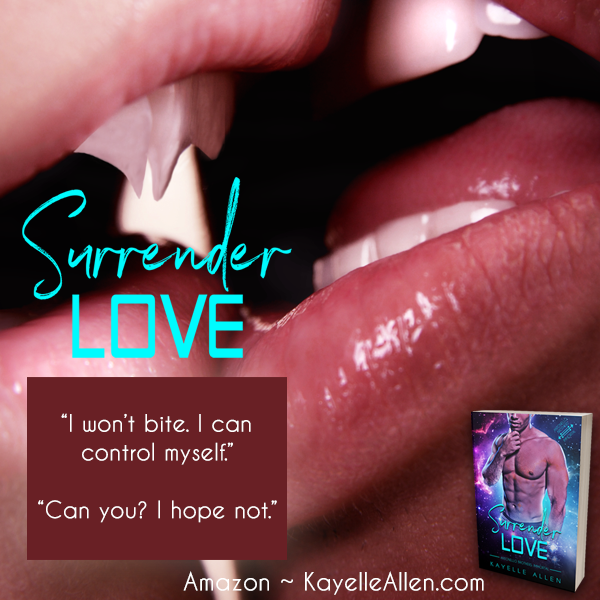 “I can control myself.” – “Oh? I hope not.” Excerpt from Surrender Love #NewRelease #SciFi #MMromance

Izzorah goes to Luc's office to thank him personally for sending flowers to his hospital room while Izzorah had been recovering. The moment seems to lend itself to a kiss, and Izzorah is waiting...

With an indulgent smile, Luc leaned closer to capture Izzorah's gaze. "Tell me what you want. Be certain before you answer."

Both ears forward, slashed pupils widening, Izzorah's gaze lingered on Luc's eyes. He lowered it to the mouth and returned to the eyes. "You. What I want is you."

Well. Luc allowed himself a smile. That was plain enough. He stroked the backs of his fingers down Izzorah's cheek and cupped a hand beneath his chin, tilting it up. Taking his time, he bent toward Izzorah.

The Kin parted his lips and closed his eyes, yielding. The image of Izzorah offering himself in such a sweet way burned itself into Luc's memory. After brushing a thumb across the fleshy part of Izzorah's lower lip, Luc released him and drew back.

Izzorah's ears went back, his eyes huge. "Did I do something wrong?"

"No, you did everything right." He caressed Izzorah's cheek. "If you want me, then you shall have what you desire."

"Then why didn't you kiss me?" A bright blush followed those words and Izzorah lowered his ears. "Is it...because of my fangs?" He placed his fingers before his mouth. "I won't bite. I know they say Kin lose control and bite, but I can control myself."