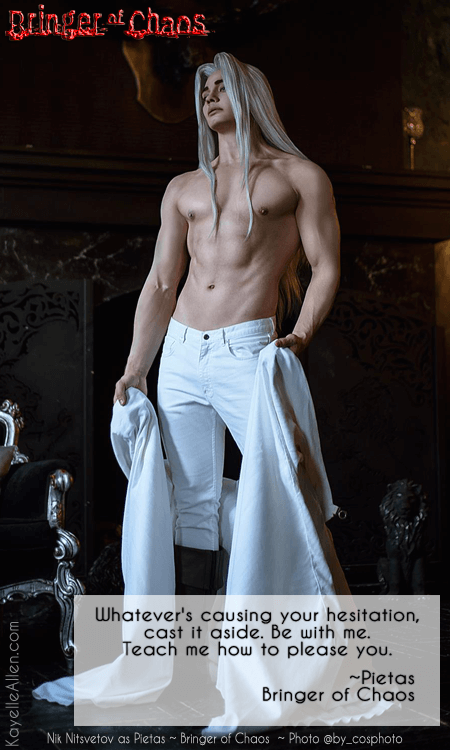 A Scale of Perfection

After the cosplay and photo shoot with Nik Nitsvetov as Pietas on September 1, I had almost 500 images to examine. His wonderful photographer, Julia (@by_cosphoto) did not take even one bad picture. There is literally not one single image I could set aside and say "close, but not quite." I realized right away I needed a Scale of Nik Perfection.

Nik and Julia make an unbelievable team. Each has a combination of incredible skill plus incredible talent. Put them together and the world of cosplay doesn't stand a chance.

Neither does my heart.

I have loved images of Nik since the first time I saw him. He took my breath away -- literally. I stopped breathing and just sat there, mesmerized, staring at the screen the moment I laid eyes on him.

Back to the issue at hand, I had a chance to have Julia touch up some of the images. Why do you need to "touch up" perfection? Because while Nik's chiseled body is gorgeous, he has tattoos, which my character Pietas does not. Though they were covered with makeup, they still showed through. Personally, I love them. They are works of art, but I have to be true to my character.

So how do you pick when your choices are perfect and perfect? There was no scale of good or not good that worked so my friend Lisa and I came up with our own. Here is how we classified the images using the numbers 1-10.

The Scale of Nik Perfection

I want to add here that working with Nik was a real treat. He is a gentleman. He treats his fans with respect and he is -- when he's not in character -- a playful imp who mugs for the camera and loves to have fun. He should be an actor. He is able to transform himself at will and that is a joy to watch.

Look at the image of him as Pietas in today's post. Imagine having Pietas - a gorgeous holy cow perfect person - live in your imagination. Now realize that he won't stop bugging you to write his story until you do it. Is it any wonder I talk about Pietas almost 24/7? I'm just lucky my husband knows how much I love this character and the story and isn't the jealous type. He's a true writer's spouse and I adore him for it.

You know the odd thing about this photo shoot / cosplay was that watching Nik become Pietas helped me understand my character better. I watched him put on the façade of Pietas and realized that even Pietas puts on the façade of Pietas. He wears a face the public can see, but inside, in the privacy of his heart, my immortal king is not who he claims to be.

Pietas has been the villain in several stories, but after I began writing his origin, I realized he is not a villain at all.

Who is he? Stay tuned to find out. No, instead--go read the books. They do a much better job of revealing the truth. And on the Scale of Nik Perfection, pardon me for saying so, but the books are a solid 10.