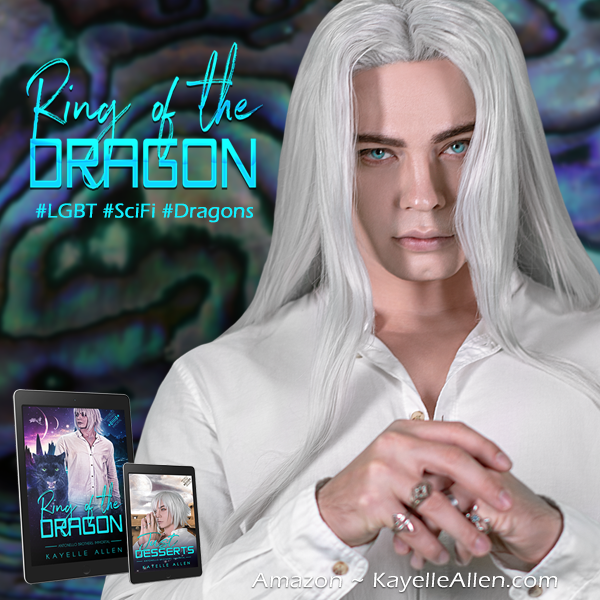 In this scene from Ring of the Dragon, Pietas is awaiting the arrival of General Cyken. The immortal king opted for casual wear instead of his uniform because Pietas and Cyken had been lovers for untold eons, and Pietas wants to impress him, refusing to believe it's over.

So now he's on his own fretting over whether Cyken will like what he sees, and depending on his android bodyguard/servant to fill him in on the man's arrival.

Pietas should have left his hair down instead of having it tied back. He reached up, but stopped short. He couldn't lift his arms far enough to remove the elastic tie without aggravating his old injury. Pushing beyond the normal ache left him in pain for days.

He could ask for assistance, but what kind of king was so indecisive he couldn't decide how to wear his hair?

As Cyken was so fond of saying, "Not happening, Pietas." Up it stayed.

Besides, to Cyken, outward appearances meant nothing.

Then why change clothes three times? This was ridiculous. Pietas lived in uniform. He ought to have worn that.

Made this meeting more formal. King and subject.

But no, Pietas had opted for casual. Relaxed and inviting.

"Stand there and don't move. Be patient for once in your life. Stop fussing. You look fine. You will not look in the mirror. You will stop worrying. Hold your head up, keep your shoulders back and ignore the pain. You can do this. You will do this."

The silence dragged on his nerves.

Oh, what was the use? Cyken would still find him lacking.

Where was the man? Why wasn't he here yet?

The entrance opened, but it was only Uurah.

The android bowed. "His ship is docking."

Pietas did a slow pivot. "Presentable?"

"On the viewscreen, he appeared to be wearing a suit, my lord. Quite presentable."

Tightening his jaws, Pietas showed him a toothless smile. "Thank you ever so much. Now, how do I look?"

FREE inside
Ring of the Dragon