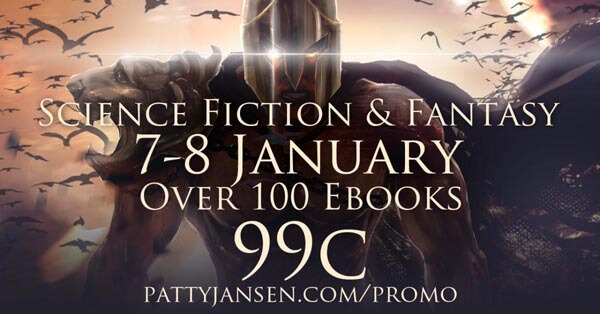 Welcome to a special weekend sale!
Over 100 #scifi books are only 99 cents each.
My featured book is Bringer of Chaos: the Origin of Pietas.

More than 100 authors (over 100 #scifi books) are promoting their books Saturday and Sunday (January 7-8, 2017) for 99 cents each. Visit this site and across the bottom of the image (shown above) you’ll see icons for the various booksellers (Amazon, Barnes and Noble, Kobo, etc.). Click the one you prefer and the entire list of books is right there, at your fingertips. The list includes Bringer of Chaos: the Origin of Pietas.

You can read the opening of the book below.

Pietas is an Ultra, an all-but-immortal warrior who leads the fight against the oppressive human race that created his people. But when he’s captured and exiled to an alien world, his only ally is Six, a human who’s been as betrayed as he was. To cross the continent and find other Ultras, Pietas must overcome his distrust of humans, and rely on Six. This mortal will either become his closest living friend or the human whose betrayal triggers all-out vengeance by the most powerful immortal ever born.

A foreword from Pietas

You are unworthy, human.

This book you hold is being presented as fiction, but it did happen. It is as real as the air you breathe. While this is not a first-person story, it follows my point of view.

I would never have allowed a human to know these things, but a friend persuaded me there can be no vengeance unless those in the wrong know what they did. When one has wronged another, one must face the consequences.

Having been persuaded to tell the story, I now allow it to be placed into your hands. I want you to know the truth. Why? Because other Ultras have hidden the truth. Buried it beneath fables and false retellings, as if you were a child unable to bear harsh reality. Unwilling to face the consequences of what your kind has done.

Above all, because I will not lie to you.

When I come for you, I want the satisfaction of seeing your regret for what your ancestors did to my kind. I want to see your fear, and taste your terror.

This is no horror story. It’s merely science fiction. Tell yourself it is only fable, if that will help you sleep. By all means, human, do sleep.

Read this, if you dare to know the truth.

In the twenty-seventh century on Earth, genslaves were supreme among all humanity’s genetic creations. They fulfilled man’s every desire. They recuperated from disease and injury so fast they were all but immortal. Their strength far exceeded man’s. Specific, ingrained abilities limited upward and lateral movement among the servant classes, keeping genslaves in jobs with no chance of advancement.

Bred to require little rest, labor-genslaves performed menial and repetitive tasks, with enough intelligence to work, but not enough to aspire beyond their station. Warriors possessed unmeasured strength and massive size. They fought humanity’s wars, died so man didn’t have to suffer, and were reborn to fight again. The physically weaker classes had more intelligence. Healer-genslaves obtained vast amounts of skill in medicine and designed cures for disease. Artists created beauty. Nurturers and teachers cared for humanity’s children. Scientist-genslaves designed additional genslaves, to make man’s life even more pleasant. All classes were created with genetic shackles of obedience, making them content to remain subservient.

While humanity relaxed, secure in a position of power, genslave-scientists created a new order of beings with free will. It will be argued through the ages whether the creation arose from faulty programming, or a desire for freedom, but the new creatures were not hampered by genetic restraints.

They took the name Ultra, and did as they pleased. Ultras were brains and brawn. No matter how difficult the problem, Ultras solved it. No matter how horrific or grisly their wounds, Ultras survived. Disease did not touch them. Starvation did not stop them. Even death did not hold them long.

The creation of Ultras changed everything.

When Ultras demanded freedom, humans claimed them soulless, inferior, unworthy, and undeserving of equality. Humans tried to silence them, and when that failed, punished them. The Ultras seized their liberty by force. Emboldened by the Ultras’ success, other genslaves rebelled, and began calling themselves Ultras as well. The First Cycle of Wars devastated half the galaxy. In the Terran Crescent and the Colonies of Man, power tilted toward Ultras. They ruled the starways. Ultras tightened restrictions and limited trade, allowing mankind meager freedoms, and no more mercy than man had shown them. Humans served, subservient to their former slaves.

Not all genslaves wanted war. Some concealed their genetic differences and abilities, and lived among humans–as human. The rumor that genslaves hid among them spawned the Human Pure movement. Purges wiped out non-human traits and enhanced sensory perceptions. Humanity weakened itself by outlawing genetic healing or correction. They identified anything and anyone considered unnatural. Anyone different hid it or faced death by fire, from which Ultras could not revive. For the human underground, the weapon of choice became a flamethrower.

Meanwhile, among Ultras, leadership arose that considered humans redeemable. These leaders sought to allow humans more freedom, and give them a voice in their own government. They hoped a kinder relationship would bring an end to galaxy-wide conflict. They hoped peace would halt senseless death and destruction, foster growth, and increase trade. In 4536 AD, after centuries of war, Ultras and humans met to discuss a truce.

But that is according to legend. Here, you will discover the truth.
—
Don’t miss out! Over 100 #scifi books are on sale right now.
Bringer of Chaos: the Origin of Pietas
Immortal. Warrior. Outcasts. Traitors took everything. Except their honor.
On sale! This week only 99 cents! Free on Kindle Unlimited
Click here to buy Bringer of Chaos http://amzn.to/1R8DAbb
Buy the print book and get the Kindle version free. http://amzn.to/2i22GNK