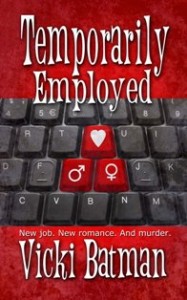 Time to Party! My friend Vicki Batman (yes, that’s her real name) has a new book out: Temporarily Employed. Join us for a Facebook Party to celebrate.

Hattie Cook’s dream job is down the toilet and her new SUV violated. Desperate for cash to cover the basic necessities of rent and food, she takes a temporary job at Buy-Rite insurance company where she uncovers an embezzling scam tied to the death of a former employee—the very one she replaced. The last thing she wants is to clash with By-the-Book Detective Wellborn, no matter how much he makes her heart pound.
Allan Charles Wellborn has secretly adored Hattie all his life. He evolved from a pocket protector-wearing geek to a handsome police detective. When the police determine there’s more to the death of a former Buy Rite employee, he steps in to lead the investigation. Overly dedicated, always perfect, he puts his job first, even if doing so ultimately hurts the one he loves.
Can the killer be found before Hattie’s time is up?

You are invited to the Facebook Party launch for Vicki’s romantic comedy mystery Temporarily Employed.
Where: Vicki Batman Facebook – http://on.fb.me/1ipdLkv
When: Today! October 17th ~ 10 am – 8 pm CST
Facebook Party guests: (including me!)

Special giveaways, excerpts, laughs and virtual champagne for all at our fun Facebook Party. Come join us!  http://on.fb.me/1ipdLkv