Podcast Interview: A Stolen Heart - Why is Luc afraid to come near a child?

James (JMD) Reid was kind enough to interview me on his Authors in Focus podcast. We discussed my Science Fiction universe and the book A Stolen Heart, in the Antonello Brothers series.

Snippet (under 2 minutes) This is me discussing Luc and his motives for avoiding children, from the book A Stolen Heart. The rest of the interview is on JMD Reid's site.

JMD Reid, author of Above the Storm 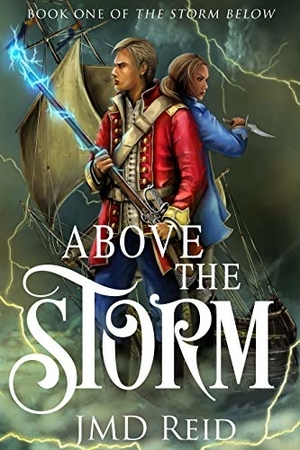 When the Stormriders attack Ary's people have little chance. Can he find a way to defeat them?

At 19, Ary has spent ten years mourning his father's death. The aftermath of the attack still haunts him. Now, on the eve of the draft he faces his greatest fear, being sent to become a marine.

He knows the cost of war.

All he wants is to marry Charlene, who he has loved since they were kids. Building a farm and starting a family sounds perfect. There's just one problem, his best friend Vel adores her, too. He'd give anything for peace.

But wanting the Stormriders to stop attacking isn't going to make it happen.

For love, for his people, and especially for the life he wants, Ary makes a decision that will change everything.

JMD Reid has been a long-time fan of Fantasy ever since he read The Hobbit way back in the fourth grade. His head has always been filled with fantastical tales, and he is eager to share the worlds dwelling in his dreams with you.
Reid is long-time resident of the Pacific Northwest in and around the City of Tacoma. The rainy, gloomy atmosphere of Western Washington, combined with the natural beauty of the evergreen forests and the looming Mount Rainier, provides the perfect climate to brew creative worlds and exciting stories!
When he's not writing, Reid enjoys playing video games, playing D&D and listening to amazing music.
Website http://JMD-Reid.com
Twitter https://twitter.com/JMDReid
Facebook https://www.facebook.com/JMDReid
Facebook Fan Group https://www.facebook.com/groups/158087188138155
Amazon Author Page https://www.amazon.com/J.M.D.-Reid/e/B00P44PBQK/
Newsletter http://eepurl.com/61bSz