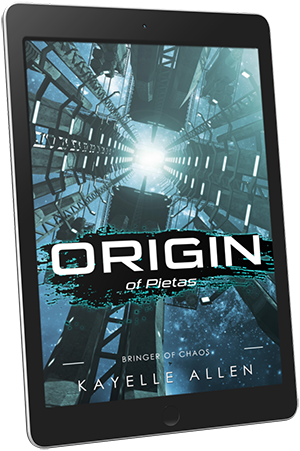 Book Hooks is a weekly meme hosted by Marketing for Romance Writers as part of the MFRW Authors Blog. It’s a chance each week for you the reader to discover current WIP or previously published book by possibly new-to-you authors.

In this scene from Bringer of Chaos (book 1), Pietas has been captured by humans and ordered to enter a stasis tube, where he will be put into cryogenic sleep and transported to a world far across the galaxy. He has other plans. Humans are ruled, not obeyed.
—

The leaders of his people gathered in sleep around him, sealed inside their curved, steel stasis tubes. Above him, humans waited for Pietas to enter the last one.

He folded his arms.

“Feast your eyes, vultures.” Pietas lifted his chin. “Humans are ruled, not obeyed. You think to imprison me? You think to bring me down like a hunted animal?” He spread his hands outward, indicating the pods. “I will not cower before you. I will not bow. I will not kneel. I will not serve. I will never submit. Humans were made to be ruled, not by my people, but by me.”

The silhouettes of humans above him contrasted with the bright light behind them. One by one, they slipped away, until a single silhouette remained.

“Fighting us accomplishes nothing.” The disembodied voice echoed in the chamber. “You won’t leave that room until you’re in stasis. Enter the pod or we’ll siphon the air, and let you die.”

“I’ve died countless times. I do not fear death. Death fears me.”

“So be it. Since you’re so set on dying, have it your way. I told you if you didn’t cooperate, I would detonate the bombs within the hostages you took aboard your ship. See for yourself.”

On the opposite wall, an image of the Uurahkal sparkled into life, and a bloom of light filled the screen. A mass of debris shot in all directions.

“Your crew has ceased to exist.”

“That image is a farce. You would not dare to destroy the council’s flagship, and you will not destroy the council. You are cowards. You lock us away in a barren room and threaten our people. This is why humans do not deserve freedom. You are worthless, miserable liars.”

“Believe me, your crew is quite dead. The universe is a safer place for it.”

“It will never be safe. Not for you.” His fists ached from clenching them. “I will hunt you down and make you pay to the last generation of your bloodline.”

“Good-bye, Pietas.” The silhouette moved from the window, and all the lights went out.

In the darkness, the pod indicator lights showed. The green pinpricks of light cast eerie shadows. High up, tiny points of blue revealed the presence of cameras and projectors embedded within the walls. They were watching, even in the dark. No doubt recording him to show his people and humans that he’d failed.

He’d make them watch his escape before he slaughtered them. Then he’d broadcast it to humans across the galaxy. Let them see their doom coming for them. He would kill them all for this.

Pietas could hold his breath longer than ten humans combined, but he pretended to stumble. He braced himself against his mother’s pod. His chest ached, not from lack of air, but from the love he held for her. He would make them pay for every affront.

Clutching a hand over his heart, he acted as if unable to breathe. He sucked in the escaping air, saturating his blood with oxygen. He shook as if unable to catch his breath, and hurried toward the isolated pod. He put himself on the far side, away from the door, between the wall and the tube, and let himself fall against it. He grappled with the opening, and then slid to the floor. As hidden from the entry and the cameras as he could make himself, Pietas curled into a tight ball before going limp.

He conserved his strength, and waited for the loathsome humans to enter.

4 thoughts on “Humans are ruled, not obeyed #MFRWhooks #SciFi #Books”